Brb, writing down all the life wisdom this queen has to share. 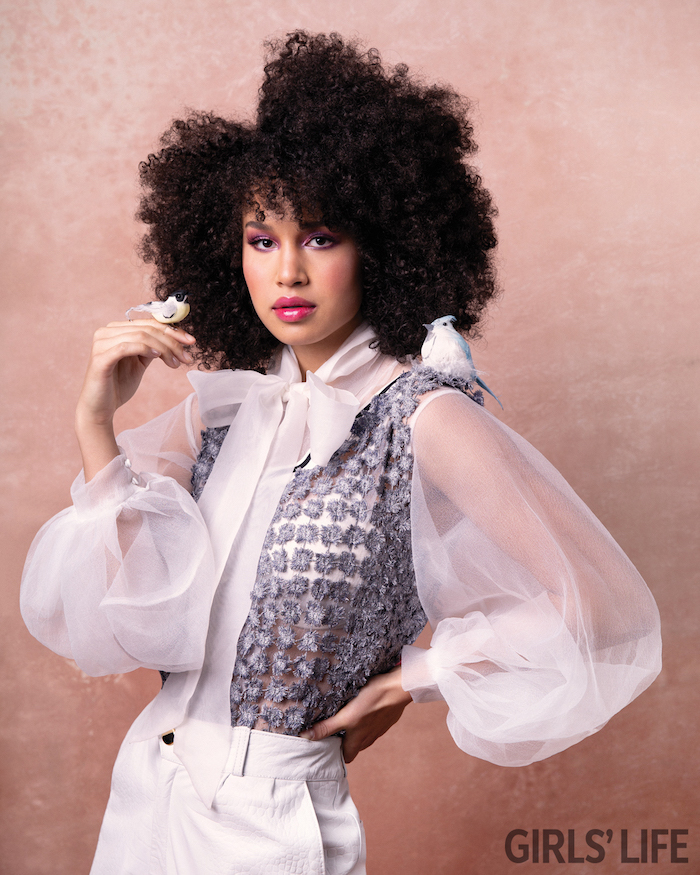 🌸 HOT PINK WINK: Step aside, neutral shadow palettes...spring calls for a fully fresh approach. Apply vibrant fuschia shadow to the inner and outer corners of your lids with a dense shadow brush for a concentrated pop of color. Then, blend a metallic lilac shade over the rest of your lid and under your lower lash line to tie it all together. Find the perfect hues in the Makeup Revolution Viva Neon Palette in Party Vibes ($9). Matchy blush and lipstick takes your look to the next level.

"It's interesting when people say, 'Oh, you seem so confident," muses actress Sofia Wylie, as she brushes a springy curl away from her brow. "Because I constantly struggle with doubts and insecurities, like any teenager. It takes practice every day to overcome those things."

It's a drab, chilly, way-too-early January morning, but 17-year-old Sofia is definitely giving off major main-character energy: The glowy skin, the foxy crown of curls, the fire dance moves, the enigmatic vibes.

No matter where you spot Sofia, whether it's scrolling past her TikTok videos or on one of your favorite shows (her second season of High School Musical: The Musical: The Series debuts this spring), your reaction is probably something like, wow, she must be the most confident girl in the world. Comments like, "Why are you so perfect?" "QUEEN" and "The only thing cooler than that dance is that HAIR" flood her social media.

But you probably wouldn't guess that for Sofia, learning to find and embrace who she really is—from her lavish locks to her sense of self-worth—has been, as she says with a bewildered smile, "a journey."

And now, she's getting honest about how she faked her confidence...until, one day, she woke up and it was real. 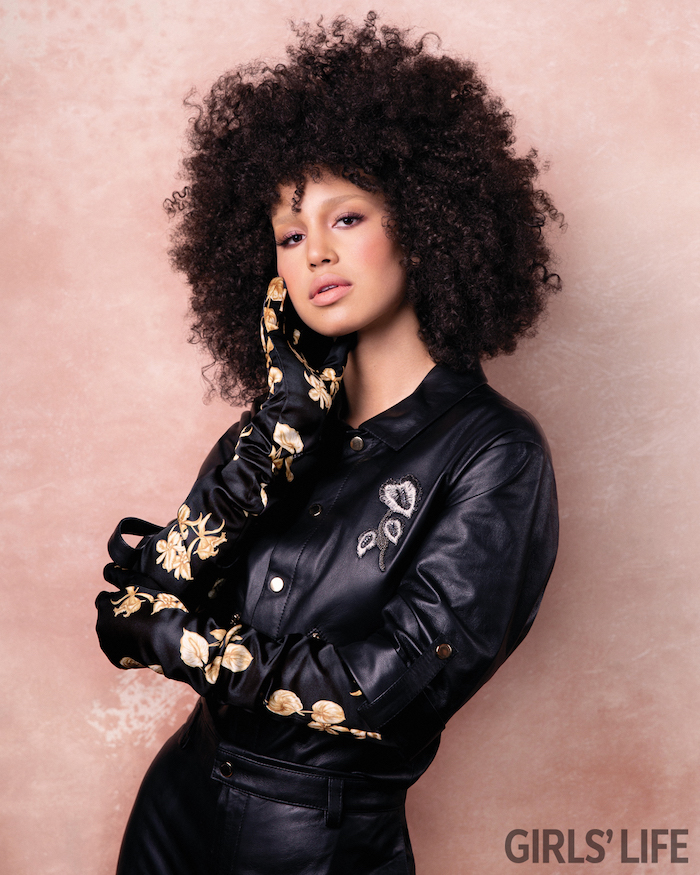 ✨ NO-SHOW BROWS: This almost magic runway-worthy trend makes your lashes really pop. Start by applying a color correcting concealer in a peachy shade with a small brush to your brows. (We recommend the Maybelline New York FaceStudio Master Camo Color Correcting Pen in Apricot, $10). Then, layer a light shade of concealer over top to create a nude effect. Comb through your brow hairs with a clean spoolie brush before locking in the look with setting powder so nothing smudges. Strike a pose!

Long before those main-character vibes set in, before she was starring in TV hits like Andi Mack and Shook (or, spoiler alert, her new role in a huge Netflix film...more on that in a bit), before she had 8.6 million followers on TikTok, Sofia was just a shy girl from Scottsdale, Ariz.

"I wouldn't talk to strangers. I was never outgoing. I relied on my older sister a lot to speak for me," she confesses of her younger days. "I couldn't even order food for myself."

In fact, the only times Sofia truly felt sure of herself were when she was performing. "Once the music cued up or I started saying my lines, it was like I became a completely different person," she shares.

Everywhere else, holding her head high was a daily battle. It didn't help that Sofia came of age in a place where she always felt like an outsider. Growing up, she and her sister were the only biracial kids in their neighborhood. In the early 2010s, when social media stars weren't really a thing yet and every celebrity seemed to have the same flat-ironed, side-parted hair, Sofia struggled to feel beautiful.

"Practically everybody I knew as a kid—all of my friends, all the adults around me—had straight hair. That was difficult, having big curly hair and not wanting to be 'different.' I wanted to belong," she recalls.

Sofia would beg her mom to let her straighten her hair for special occasions but then, before she knew it, she couldn't go a single day without taking a hot iron to her strands. "For the whole beginning of my acting career, my hair was always straight," Sofia remembers. "I mean, talk to anyone with curly hair. They've probably been through something similar where they burned it out because they were straightening it so much."

Eventually, Sofia says, it got to a point where every time she washed her hair, it didn't even look curly anymore because it was so damaged.

Without her crown, she almost felt like she'd lost herself. "It was so weird because I didn't realize how much I loved it until it was kind of gone," she says.

"Looking back now, I wish I could put my hands on young Sofia's shoulders and tell her that her hair is such a big part of who she is—and that to lose it would be so sad. Now, I love my curls. They make me unique, and I would never change them for the world. But, at the time, no one could tell me different."

It really wasn't until she was 13, when Sofia discovered the world of beauty—different haircare and skincare products, techniques and experts—that the confidence she felt while performing started to carry over into everyday life.

"When I began work on my first show, Andi Mack, the stylists showed me how to heal my hair so I could wear it curly again," Sofia recalls.

They introduced her to the ingredients and methods she swears by to this day: Applying a hydrating leave-in conditioner or hair mask 15 to 30 minutes before washing (her current faves are by Function of Beauty, SheaMoisture and DevaCurl), using reparative protein treatments, drying her curls with a microfiber towel and a diffuser and sleeping with a satin pillowcase and bonnet.

"It was all to get my hair back to where it was before I got caught up in what I thought it should look like," says Sofia. "It's been a long process, but now I can't imagine living without this big puff on my head."

Through her hair journey, Sofia discovered an obsession with skincare and makeup, too. And, before she knew it, Sofia was a low-key expert in topics like Korean beauty and sheet masks ("K-beauty is years ahead of the U.S.," she says), hydration and exfoliation ("I always make sure to moisturize and prime my skin before makeup and to exfoliate once a week to remove dead skin cells.").

She started dropping her glow-up regimens on social media because people actually *were* asking about her skincare routine. And, from her genuine love of all things beauty, along came opportunities like working with the legendary beauty guru Laura Mercier and signing with IMG Models (the agency, by the way, that also represents National Youth Poet Laureate Amanda Gorman and second daughter/instant icon Ella Emhoff).

For Sofia, learning how to care for her hair and skin—instead of trying to force them to be something different—was super empowering.

"Eventually that confident person I was pretending to be when I was performing became the person I truly was," she explains. "But it took time. It's taken a lot of mental repetition: Telling myself that I'm enough, and to not have fear." For Sofia, the process became not just about finding her look but about finding herself. Her outer and inner beauty bloomed at the same time. 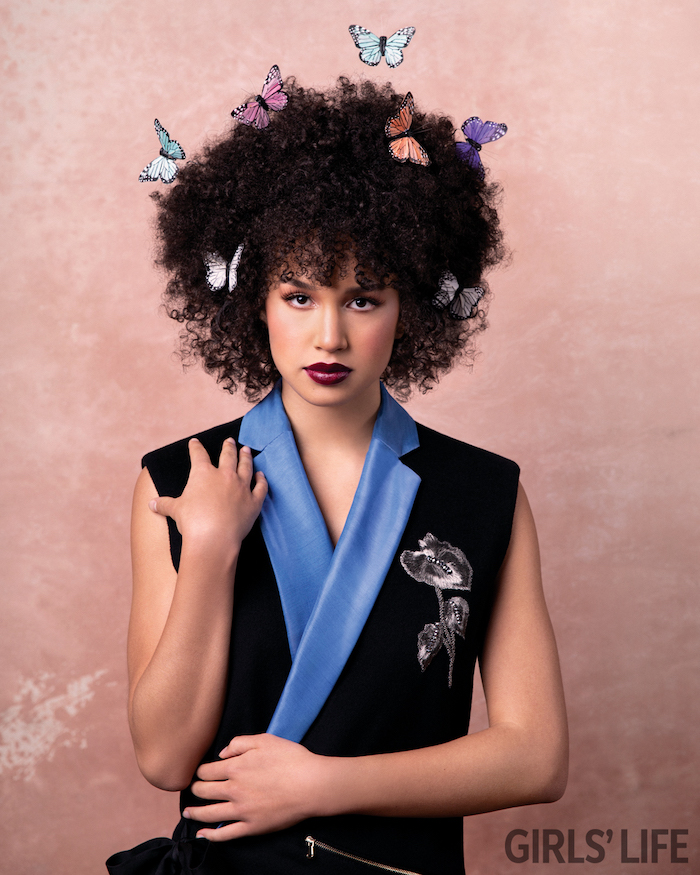 🦋 DARK ROMANCE: It's probably been forever since you've rocked a bold lip (thanks, face masks!). Next time you're hanging with your bubble (or going on a FaceTime date), swipe on a deep purple like The Lip Bar Lipstick in Merlot ($13). Keep the vibe going with a subtle cat-eye—just line the top lashes with black liner and blend a neutral brown shadow under the lower lash line before adding lots of black mascara. Contrast your dramatic look with flutter hair accessories.

On the edge of adulthood and glowing up more every day, Sofia says she has "so many dreams."

On her bucket list? Starting her own production company and acting in a period piece, a historical drama, an action movie and an indie coming-of-age movie ("I am a sucker for those," she says).

Sofia also hopes to get to work with one (or all!) of her heroes: Denzel Washington, Will Smith, Zendaya. And then, top of the list, she wants to star in a fantasy movie. "I love anything fantasy," she gushes, her inner bookworm peeking out. "I have this huge bookshelf right next to me and literally everything is young adult fantasy fiction."

And that big dream is already coming true: Sofia's next role is in a Netflix adaptation of one of her favorite fairytale series, The School for Good and Evil by author Soman Chainani.

Sofia will play Agatha, one of the two leads. "Getting to breathe life into this world and this character that people have already loved for so long is really exciting," she says with a smile. "And we get to shoot in Ireland, which is going to be so beautiful."

Even as her career takes off, Sofia's self-esteem—like everyone's—is not something she can just set and forget.

"I still have anxiety that I'm not good enough. That I'm not ready for this big life. But we're all on our own path, and everyone is going to shine at their own pace," Sofia says as she flutters another curl out of her eyes. "Knowing that I'm doing everything I can to grow and continue to live this passion of mine—that's really what gives me confidence."

SOFIA'S BEAUTY FAVES
Mascara or highlighter: "Mascara."
Clay mask or sheet mask: "Sheet mask."
No-makeup makeup or full-face makeup: "No-makeup makeup. Just mascara, highlighter and clear lipstick. Putting on gobs of foundation makes me want to throw up!"
3-step or 10-step skincare routine: "3-step. I'm too lazy."
Favorite beauty Instagram account: "@shaiamiel aka The Curl Doctor. He really helped me begin my curly hair journey."
If you woke up tomorrow and social media suddenly disappeared, how would you spend your day? "Reading! That's how I get my dopamine."

Hey, girl! Just wanted to let you know that a version of this story originally ran in our April/May 2021 issue. Want more? Read the print mag for free *today* when you click HERE. 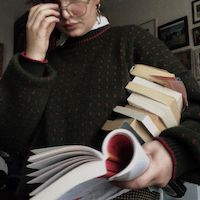 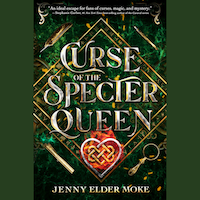 The adventure of a lifetime...if Sam can survive it. Enter to win here!