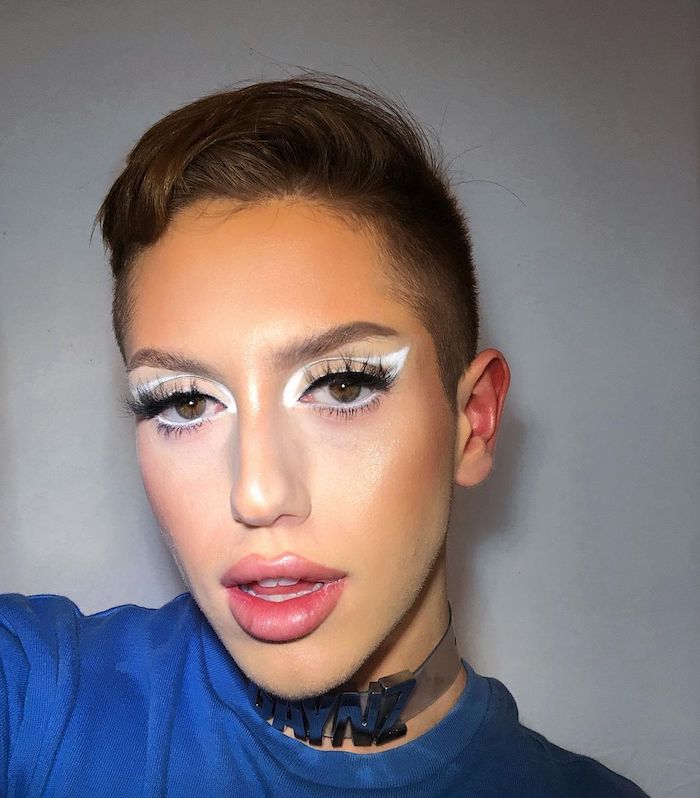 If you heart makeup trends, YouTube and being authentic to who you are—then you're *so* going to love Brendan Jordan. The social media star and amazing performer (who's most recently starred as Benny in Brat TV's Attaway General) brought Girls' Life readers all the best secrets to living your most genuine, happiest life...

"I had a moment that changed my life overnight. I wouldn't be where I am today without it, but it came faster than I ever imagined. It was about six years ago, I was a freshman in high school and had just come out as gay that year. My life just changed and I didn't know what to do—I don't know if I was *really* ready for it, but I just kind of rode the wave. Obviously there was a lot going on behind the scenes as well. I was at a private school, based in [Christianity] and I was also getting a lot of hate from the gay community, saying my femininity was, like, something I should be ashamed of. I filmed a YouTube video talking about the entire experience and sharing some things I've never shared before and that'll be out soon. It's a really vulnerable video but I want to let everyone know the real me."

"I think the really cool thing about social media is that you can chat to someone halfway around the world, almost instantly. Throughout history we've never been able to do that before. We have this opportunity to learn just, like, from our beds. But it's not the same as genuine human interaction. One of the negatives is that, speaking from a personal perspective, social media can get very toxic when you have issues with self-comparison. We all filter ourselves, whether we say we are or not. There's a lot that social media doesn't say about life that I wish we could find a way to capture."

"When people find my channel, I want them to get a sense of who I am—I don't really conform to anything. To get a sense of that you can be anyone you want to be. You have total power and control over who you are and what you want to do in this life. I want people to live for that unapologetic authenticity, that creative expression, to have a place of support, to feel like they don't have to be perfect and to get in touch with their inner artist. I'm just going about life and exploring my identity and what I want to do and who I want to be. Beauty isn't one thing. I want people to express themselves in ways they never thought about doing before and to find that inner self-expression and let that shine through."

On advice for teens discovering their identity:

"Don't pressure or rush yourself to have a label or define yourself. I just wish I cared less what others thought about me when I was in middle school or in high school. I feel like if I lived back then the way I do now, I'd be ten times stronger. Just listen to yourself and tune into yourself. Ask How can I be more *me* today? What can I do not to bow down to others' wants, needs and desires? At the end of the day, it's you that matters. Take care of others and spread love but also take care of you. It takes a lot of strength to be honest with yourself and with others."

"I've wanted to act onscreen since I was five years old so I had a really fun time playing around with Benny's character. He reminds me a lot of myself—almost the physical manifestation of who I wanted to be as a teenager. I admire Benny's strength. [In Season 2] we see Benny really take charge of who he is and realiizing that, when he didn't feel comfortable to do so, he was the one standing in his own way. Something I love is that I got to help conceptualize Benny's storyline and character. It's very inspired by mine so I could turn my struggles into art. Expressing my inner self through Benny was almost a way of reliving and healing my past issues that I'd kind of put away, so I'm so grateful for the opportunity. I hope this isn't the last we see of Benny because Benny is such a powerful tour de force."

"Makeup and beauty very much empower me, but I tend to lean more toward alternative beauty—finding beauty in things like sadness, messy makeup, creativity, anything that tells a story. I think that, for a miinute, beauty became more about beauty instead of the artistry behind the beauty. I'm leaning toward more of [that artistry] that comes from such a pure and childlike place. Very runway-inspired. I think makeup rules are meant to be broken. There's always a new trend of, you have to put on your foundation this way, but there isn't one right way. We don't all have to look like each other. I live for that stark contrast, like the bleached eyebrows with dark smoky eyes where I'm like, 'Woah, you look like an alien and I love it.' I'm like that with fashion, too. You look back at pictures, like, 'What was I wearing?' and it means you were having fun in that moment. That's what matters."

"You're actually catching me in a very, like, in-between moment. I'm focusing on relearning how to be happy with myself and just being a 21 year old. I want to learn as much as I can while I'm in my twenties. I've been wanting to learn how to dance lately, and a part of me is like, 'Come on Brendan, it's already too late,' but another part is like, 'You're 21, get out there and dance!' If I think of something, I want to go do it. I'm trying to learn as much as I can and prioritize the things that are important—my mom, my dad, my sister, my dogs, the people who love me and me. I have such a passion for sharing on social media and bringing onscreen representation for people like me. I don't want to have any regrets. I don't want to think, Oh, I wish I did this when I had more time. I'm not stopping."

Brendan will be posting on YouTube Thursdays at 12 PM PST!