Imagine being head over heels in love with someone, but not being able to touch them. Or hold hands. Or even stand next to them. That’s the grim reality explored in the Five Feet Apart (availabel on digital May 24 and on Blu-ray Combo Pack, DVD, and On Demand June 11), a heart-wrenching tale about two teens battling cystic fibrosis.

And for the film’s star, Haley Lu Richardson, 24, playing one of those teens was no easy task.

“Something emotional or intense happens in every scene because that’s just the kind of movie it is,” says Haley Lu. “So I was crying every day."

Five Feet Apart follows Stella Grant, a type-A teen with cystic fibrosis (CF), an incurable, progressive, genetic disease that leads to lung infections and limits the ability to breathe over time. While receiving treatment, Stella meets Will Newman (Cole Sprouse), a charming fellow CF patient. The two fall in love...but, because they both have CF, they can’t come within six feet of each other. If they do, they risk cross-infection.

While playing such a serious role definitely had Haley Lu in her feelings, that’s not to say there weren’t any fun moments on set. “We were filming this big scene for Will’s birthday and we were all supposed to be laughing harder than we ever have in our lives,” Haley Lu reminisces. “But we were so tired, so we just fake laughed really loudly and obnoxiously until it turned into real laughter. We were so delirious, but it was all the more fun because of that.”

During filming, Haley Lu met Claire Wineland, the YouTuber, author and inspirational speaker with CF who inspired the character of Stella (along with other CFers). Although Claire couldn’t visit the set because of health risks, she did consult on the film and FaceTime with the cast to offer real-life insights, which helped Haley Lu, in particular, relate better to the experience of living with the disease.

“We want people to not only connect to the film but be more aware of CF,” Haley Lu explains. “It was important to us that Claire gave her thumbs up on everything.”

Unfortunately, last year, at 21, Claire suffered a massive stroke a week after her lung transplant surgery and passed away.

“One of the greatest gifts of my life so far was being able to meet her,” Haley Lu says. “She’ll always have a really special place in my heart.”

Have you seen Five Feet Apart yet? How did the flick make you feel? Share in the comments below.

Which warm and cozy drink are you sipping?

For the bestie duo that...slays their 10-step skincare routine. 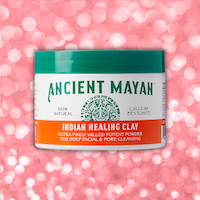 Healthy + hydrated skin? It’s a winter must. This Red by Kiss Ancient Mayan Indian Healing Clay is made with 100% natural calcium bentonite and makes an amaze addition to your Saturday night spa lineup. Ahh... Enter to win here!