Lonnie is getting a little mischievous in tonight's Descendants 2! 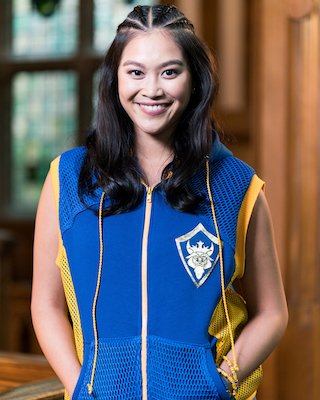 Tonight’s the night! Descendants 2 finally premieres on Disney Channel and we are *so* excited! One of our fave HKs is Lonnie (Dianne Doan), and we’re so ready to see her sporty side come out in some intense battle scenes with Uma and her pirate crew.

We caught up with Dianne and chatted about all things D2. She dished on playing an awesomely strong female character and her long-time obsession with Mulan!

On getting to play Lonnie
One of Dianne’s fave parts of filming was getting to be a part of the amazing fairytale world. She also loved getting to play such a strong character. “Lonnie is such an independent individual that it was fun to play someone who, at such a young age, is so sure of herself and doesn’t let anyone tell her she can’t do something that she sets her mind to,” she said.

On Lonnie’s bigger role in D2
We’re so happy that we’ll be seeing a lot more of Lonnie in D2! “Lonnie really takes charge of her life at Auradon Prep,” Dianne spilled. “She becomes the only female player on the Swords and Shields team!” Dianne also loved seeing changes in Lonnie’s wardrobe. “Kara Saun did an amazing job adding sporty elements to whatever Lonnie wears.”

On what she hopes the viewers learn from Lonnie’s story
It seems like the flick is going to be full of mega-inspiring themes! “The main message that I portray in this film is, ‘You can do anything you set your mind to. Don’t let society, your gender or age stand in the way of what you want,” Dianne said.

On Lonnie’s personality
Despite being surrounded by HKs, Dianne said that Lonnie has a bit of a mischievous streak about her. “She’s a little bit of a rebel,” she said. “But, she has a smile on her face in everything she does, especially when battling it out with pirates.” We’re so ready to see this new side of Lonnie!

On getting to play Mulan’s daughter
Dianne loved getting to play one of her childhood heroes. “Growing up, I was and still am obsessed with Mulan!” she spilled. “It was the first time that I related to a Disney hero. I saw myself in her, and she embodies so much of what I hope I brought into playing Lonnie.”

Watch Lonnie battle it out in Descendants 2, premiering tonight at 8 p.m. EST on Disney Channel!

How excited are you for tonight's premiere? Let us know in the comments below!