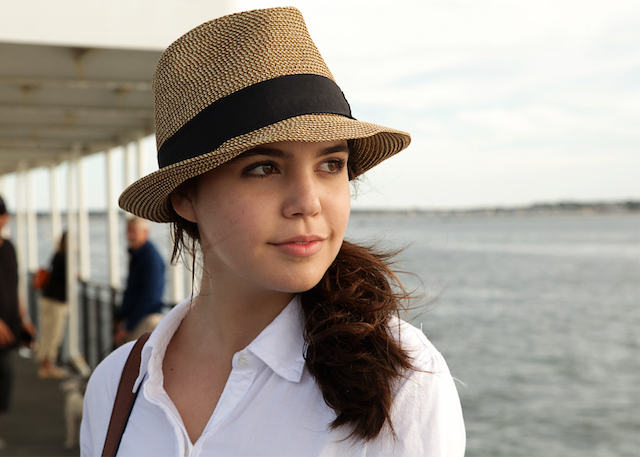 Way back when, we reported that Bailee Madison was not only going to be starring in her new title Annabelle Hooper and the Ghosts of Nantucket, but that she was going to produce the film as well. With amazing roles on Once Upon a Time and The Fosters, we weren't surprised to learn that B was tacking on such a big project at just 16 years old—it only seemed like a natural step for this mega-talent.

Fast forward and Bailee's producing debut has, well, debuted! Annabelle Hooper and the Ghosts of Nantucket, released Aug. 9, is a mystery in which Bailee plays teen writer, Annabelle. Set on Nantucket Island, Mass., Annabelle and her friends set out to unleash the secret behind a legendary ghost story they encounter on their vacay, but to do so they'll have to trump two tricky thieves in the process.

This flick sounds like the perfect mix of friendship, suspense and, with Bailee producing and starring, like a prime example of what can happen when you work hard. GL caught up with Bailee for the film's release. Below, peep her ponderings about producing, acting and her unexpected upcoming projects.

Girls' Life: In the flick you play a writer, Annabelle, who has a creative mind just like you. Tell me a little bit more about your character.

Bailee Madison: Annabelle is a character who lives for mystery, she’s so curious and brave and always ready for an adventure. Her family goes on a vacation to Nantucket and from the moment she steps off the ferry she can feel this pull—that there is something amazing in store for her to explore and she is determined to unlock the mystery that is the history of the island.

GL: That so cool! What was it like to produce for the first time? It seems incredibly exciting.

Bailee: It was such an amazing learning experience for me. I’ve always loved every aspect of making a film and when the opportunity to step behind the camera and be a producer came about, I was truly humbled and ecstatic. It was thrilling to still have my creative mind working, even after the cameras stopped rolling.

GL: What’s the biggest difference between acting and producing?

Bailee: One of the biggest differences between acting and producing is that you wake up with a responsibility for not just yourself, but everyone on the set. I'm a people pleaser and wanted to make sure everyone was cared for, happy and enjoying their time on set.

GL: What was it like to juggle both jobs at the same time? That must have been a *lot* of work.

Bailee: I was very fortunate to have a wonderful crew behind me that took care of me and encouraged me. I loved the challenge of being in front and behind the camera, and I'll be forever thankful that my first time producing was with such an amazing cast and crew.

GL: What do you hope fans take away from the film?

Bailee: I hope fans take the opportunity to watch this movie with their families and enjoy quality time with each other. It’s definitely a story that I think kids, parents and grandparents will all connect with. I’d also love to encourage them to go out and explore their city—you never know what you’ll find!

GL: That's so sweet! Now, with this huge project over, you must have more acting and producing titles lined up, yes?

Bailee: I recently wrapped Cowgirl’s Story, which I also got to produce. We’re in post-production now and I can’t wait to share the movie with everyone. I’m currently filming Different Folks which will be out on Freeform later this year and we’re working on season three of Good Witch! I also co-wrote a young adult novel, which I’m beyond excited for and can’t wait for fans to experience that new adventure with me.

Phew!—Bailee has so many exciting happenings coming up we can barely keep track. For now, catch Bailee's producing debut in Annabelle Hooper and the Ghosts of Nantucket on Digital HD and On Demand right now.

What do you think of Bailee producing her first film at 16 years old? Have you seen the flick yet?