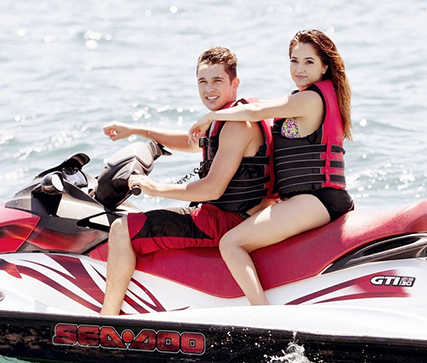 We were pretty sure that exes Austin Mahone and Camila Cabello were on pretty good terms after their break-up. Both seemed to understand that not all relationships last forever and neither seemed to be bitter about the split or about moving on. In fact, Camila even stood up for Austin's new girlfriend Becky G after some fans got a little rowdy when their relash went public. After Austin's newest interview, though, we're not so positive anymore.

While catching up with MTV on the set of his newest music video, Austin officially confirmed that the and Becky are an item, but in the process he totally put-down Camila. "It’s crazy, I never had, like, a real relationship before," he said about Becky, which lead Harmonizers all over to wonder what exactly he considered his relationship with Camila.

Even Camila took note, hitting up Twitter to show exactly how she felt.

While it's possible that Austin misspoke—or meant his first real relationship in the spotlight since he and Camila had only confirmed they were dating a hot second before they were over—his statement doesn't look so good. We're willing to give him the benefit of the doubt for now, but until he clears up what he meant, this burn looks pretty painful.

What do you think Austin meant by calling this his first "real" relationship? Should he apologize to Camila? Tell us your thoughts in the comments.