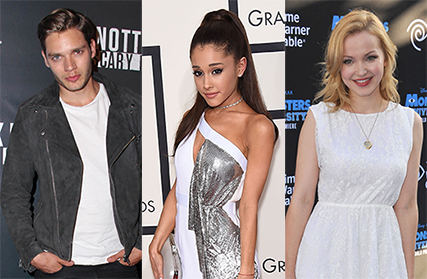 We’re going to get straight to it and say that this week was full of some of our fave celebs doing some crazy things. From new promo shoots to TV shows and to award-winning duos, so much happened that we couldn’t contain our excitement.

We were so excited when we found out that one of our fave series, The Mortal Instruments, was moving to the small screen as Shadowhunters on ABC Family after its movie debut, and when we heard who the first actor cast was, we somehow got even more excited. Dominic Sherwood, AKA the cutie from T. Swift’s "Style" music vid (and Sarah Hyland’s BF), is set to play mysterious shadowhunter Jace. Dominic is already super cute and super sweet, so we're psyched to see him take on this new adventurous role.

With Paper Towns releasing more previews and snippets from the movie, we have been able to see its stars, Nat Wolff and Cara Delevingne, together more than usual. We love this goofy pair and how much fun they always seem to have, especially at events like the 2015 CinemaCon. The duo attended yesterday's convention together to receive the "Big Screen Achievement" Award for their work in the upcoming movie. How often do you hear about a filming winning awards before they've even hit theaters? Now that's cool.

We have been talking a lot about Descendants over the past few months, but so far it's mostly just been that: talk. Now, after seeing all the newly released cast pictures, we know the wait has been worth it. The story follows the children of classic Disney villains in their quest to prove that they can be good, unlike their parents. Jam packed with some of our fave stars like Dove Cameron, Cameron Boyce, Booboo Stewart and Kristin Chenoweth, we know that this Disney Channel Original Movie is going to be an instant hit when it premieres this summer.

Beauty and the Beast

The casting news has been flowing in lately and all of it has been amazing. Though BatB was already set to feature Emma Watson, Dan Stevens, Luke Evans, Kevin Kline, Josh Gad and Emma Thompson, we've also now got word that Gugu Mbatha-Raw, Ewan McGregor, Audra McDonald, Stanley Tucci and even Sir Ian McKellen have picked up royal roles. With Gugu as Plumette the feather duster, Ewan as Lumiére the candelabra, Audra as Garderobe the wardrobe, Stanley as Cadenza the grand piano and Ian as Cogsworth the clock, this cast is officially out of this world. We don't think we can handle all this star-power—but we can't wait to try.

It seems as if no one is safe this season. After weeks of not being spotted on dates or at A-List events, we began questioning Ariana Grande and Big Sean’s eight-month romance. Although this couple was always the cutest on red carpets and in their Instagram selfies, it couldn’t have been easy to stay together with such opposite working schedules. The pair’s split has finally been confirmed due to high stress and busy schedules, but the two plan on remaining friends. And who knows, maybe we’ll see them together again in the future.