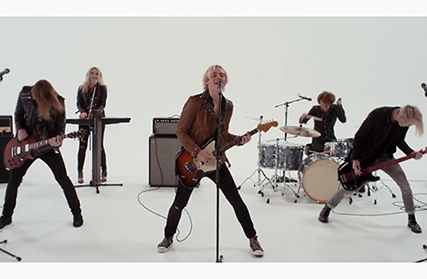 We got the behind-the-scenes scoop from April/May music issue cover girl Rydel Lynch on her band R5's upcoming music, but as the album gets closer the news is getting even bigger. With a new album release date (July 10) and title (Sometime Last Night), the band is gearing up to really get going.

And right now they're starting with a new music video for their hit single "Let's Not Be Alone Tonight." The vid features the gang rocking out to their song, jamming on set and really getting into it. Check it out.

That's not all, though. Not only is Sometime Last Night available for preorder starting now, the band also announced a headlining tour kicking off July 7th that'll feature Jacob Whitesides and – best of all – the fifth Lynch sibling, Ryland. Tickets go on sale April 17 at 10:00 a.m., but fans with presale codes can buy in as early as the 14th.

“We can’t wait for our fans to see what we have in store for them this summer,” said the band in their official statement. “Playing such amazing venues has always been a dream of ours and we’re so excited to have our fans be a part of it.” They've also been dishing on Twitter and even giving hints about some of the other songs on the album – including one for Rydel.

Which part of R5's news is your favorite? Are you loving the video or already marking the tour down in your calendar? Let us know in the comments below.

Photo and video credit to: R5