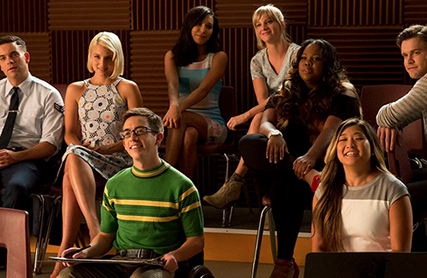 The very first episode of Glee premiered on TV in May of 2009 – which means we've had this crazy wonderful show in our lives for almost six years now. Half a decade later, the beloved series is finally coming to an end with its 120th and 121st episodes rightfully titled "2009" and "Dreams Come True."

In honor of the show, which has meant so much to so many people over the years, we've put together a list of our top five performances. Though it was hard to narrow it down to just a few, these performances all have a special place in our hearts – and an even more special place in the show. Check out our fave five below.

"Thriller / Heads Will Roll" from "The Sue Sylvester Shuffle"

This song is one of our favorites because it features so many members of the cast even beyond the glee club members. In the episode, despite some pushback and initial resistance, the gleeks joined up with the football time for an awesome performance. They even reunited with a few former members who had previously chosen the Cheerios over the New Directions, though they later changed their minds. The song and dance brought everyone together out on the field in a totally awesome way. Plus, this mash-up absolutely rules and hardly any other performances lived up to these visuals.

"Keep Holding On" from "Throwdown"

In the seventh episode from season one, the glee club members rally behind one of their own for one of the first times in an incredibly special, heart-warming performance. Despite animosity between Quinn and Rachel – and romantic tension between Rachel and Finn – they all come together to share their strength with Quinn when the school reporter publishes the news of her pregnancy. Quinn's breath at the end of the performance as she draws courage from her friends gets us every time.

The Troubletones only briefly existed as their own group before they were reabsorbed back into the New Directions, but while they were around, they were the absolute best. All girls singing girl power anthems? Yes, please. This mash-up in particular joined two songs we loved (all hail Queen Adele) and featured performances that somehow, impossibly lived up to the originals. Plus, Santana's emotional struggle in this ep was incredibly powerful, and the slap that came after this performance is a moment we'll never forget.

"Make You Feel My Love" from "The Quarterback"

After the sudden passing of Glee star Cory Monteith, the show honored him and his character with a very special, emotional episode. Most heartwrenching of all was Lea Michele, both Cory's real-life girlfriend and on-screen love interest, and her performance of Adele's "Make You Feel My Love." Though it was Rachel singing to Finn on screen, it was clear that all of the emotions and tears were all too real, making this one of the most important moments from the series as a whole. The song itself is gorgeous, but it's watching everyone's actual heartbreak on screen that really hits us.

This was the song that truly brought the glee club together in that very first episode. They were a group of misfits, but in the moment it counted, they came together to put on an incredible show and prove their optimism and potential to become something great. Without flashy choreography to distract from the tune, the glee club kept it simple and let their amazing voices and harmonies shine through. This song is the definitive Glee song, and we'll never be able to hear it without remembering the show that we loved so much.

Which Glee song is your favorite? Are you watching the finale episodes tonight on Fox at 8:00 p.m.? Discuss in the comments below and don't forget to check back on Monday for our top moments from tonight's episodes.