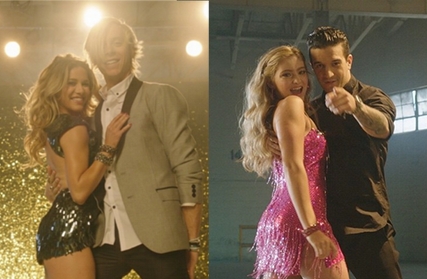 Whether you missed last night's Dancing with the Stars premiere or just can't get enough of those awesome moves, we've got the videos from Riker Lynch and Willow Shield's performances – and can we just say they both rocked it? Dancing is hard, and while we may not be qualified to judge these celebs' technique, we can say for certain that it's clear they went out on the floor and gave it their all.
BTW, minor spoiler alert ahead: if you don't want to know how Riker and Willow were scored, skip the blurbs and just watch the videos instead.

Willow and her partner Mark Ballas kicked off the night with a cha cha to Meghan Trainor's hit "Lips are Moving." At just fourteen, Willow's officially the youngest star to ever compete, but we think she's got the chops to make it through. Though her performance didn't get rated as high as we thought it deserved (three 6s and a 7 seemed low to us), it was still pretty good. Watch the vid below to see.

Riker and his partner Allison Holker traded in the normal dance floor for a special stage later in the night for their jive to "What I Like About You" by The Romantics. Their dance was super energetic and fun, and Riker even got to show off some of his own special moves. The judges were digging their dance, too, and gave them the second highest score of the night with one 7 and three 8s.

What do you think of Willow and Riker's performances? Are you rooting for anyone else in the comeptition? Let us know in the comments below.

POSTED IN Riker Lynch, Willow Shields, Dancing with the Stars