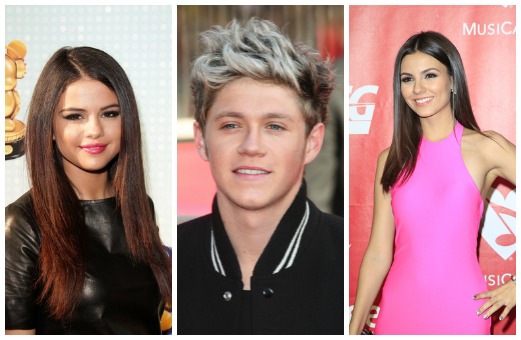 Birthdays, award shows, new music–oh my! This week had something new happening each day and we couldn’t get enough. From watching the red carpet to wishing one of our fave celebs Happy Birthday, we barely had time to breathe! Read on for the scoop.

One Direction took the stage at the BRIT Awards this week after they won the Global Success Award. The boys were all smiles…until they realized someone was missing! Turns out Harry Styles was in the bathroom when the group won and sprinted on stage while the boys were accepting their award. Not only was he late, but he then asked what award they had won. Hey, when you gotta go, you gotta go.

Speaking of 1D, it looks like there might be a new Nelena power couple heating up the world. Rumors surfaced this week when Niall Horan and Selena Gomez were spotted in London on what appeared to be a date. One source is even going as far as saying the two were actually spotted making out. Gasp! Think this is the real deal or just a budding friendship? We kind of don’t mind these two together.

These fashionista sisters are not only clothing designers, models and TY stars, they’re now adding authors to their growing resumes. Kendall and Kylie Jenner revealed this week that they’ve penned a dystopian read titled Rebels: City of Indra—and it’s set to hit shelves this June. The two have been collaborating with author Maya Sloane since summer 2012 and they have been working hard. The girls said that they want to, “do something so different, something that we really love.” What do you think? Will their sci-fi novel be fab or a flop?

Victoria Justice celebrated her 21st birthday on Wednesday and friends from all over took to social media to share their love. The cuite was spotted celebrating the milestone in West Hollywood with BF Pierson Fode and sister Madison. From Zoey 101 to starting her new show for MTV, Vic has become the queen of the small screen and we hope she never leaves. Happy Birthday Vic, from GL!

We know that Taylor Swift and Lorde have put aside their differences to become the best of friends. This unlikely duo has completely different music styles but in an interview this week, Lorde made us wonder if there is a possible T-Swift/Lorde tune coming soon. When asked if she would ever collab with Swifty, Lorde said that, “with an artist like her [Swift] the sky is kind of the limit.” Eeep! We know that if these two worked together, they would create a hit. What type of song would you want them to sing?

+ Battle of the A-listers! Who rocked the red carpet best?