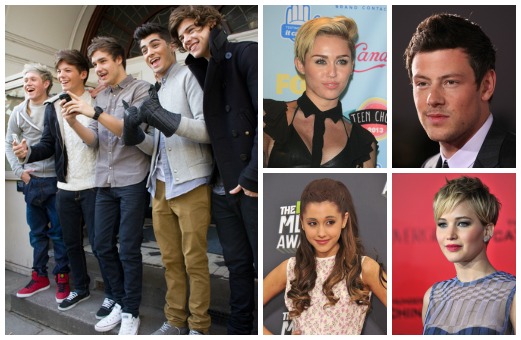 2013 was a huge and exciting year, loaded with the biggest celeb-stuffed gossip yet. Every week, we give you our top celeb scoop from the past seven days but now that the year is coming to a close, we figured we’d list off the best of the best. Many things made you go “OMG!” this year, but these 10 stunners seriously shocked us. Some, we’re still shocked by! Read on to see what we’re talking about.

J. Law surprised fans everywhere when she uploaded a pic of her new hair, chopped to a cute bob! We love her versatility and how she looks fab no matter the style. Think she’ll do another drastic change in 2014?

2013 was a huge for Ari. Not only did she score her second GL cover (August/September 2013), her spin-off Nick show Sam & Cat was a major success, her debut album landed at No. 1. Oh, and did we mention she snagged herself an adorable British BF? Earlier in the year, Ariana was dating Jai Brooks, part of the YouTube sensation The Janoskians. But after many rumors and a not-so-nice interview done by Jai, Ari has held her head high and is looking towards her bright future with new cutie Nathan Sykes by her side.

We were shocked to hear that Austin Mahone had to postpone his tour this past October due to being extremely sick! Austin had a blood clot in his throat, which landed him in the hospital. Thankfully, this cutie made a full recovery and just wrapped up a stint on the Jingle Ball tour circuit.

One Direction, in general, has taken off this year. With a blockbuster movie, a new fragrance, a sold-out world tour, a stadium tour set for 2014 and a hit new album, nothing can stop this boy band. There have been girlfriends, rumored publicity stunts and never ending paparazzi following their every move in 2013, but these boys are always thankful for their fans and that’s what counts most. Our money’s on the fact that they will be able to top their recent success in the new year to come.

Maybe breaking up with Selena was a good thing? Justin Bieber released a new song every week for a chunk of 2013, calling ’em his “Journals.” It’s easy to tell which songs were inspired by his relationship with Sel and how he is moving on. Let’s hope that the Biebs can stay out of trouble long enough for his full album to make it on the charts.

One of the biggest flicks to hit the screen in 2013! This sequel to the mega popular The Hunger Games was an instant success. We loved being able to see two-time GL cover girl Willow Shields light up the screen once again. We won’t be surprised if this hit takes home all the awards in 2014.

1/5 of the power boy band One Direction is officially off the market. At the London premiere of 1D’s movie This Is Us, Zayn Malik’s longtime girlfriend, Perrie Edwards, was spotted sporting a serious engagement ring. We can’t wait for this wedding. What about you?

#3 The Jonas Brothers break up

The shocking breakup of this beloved boy band rocked the world. The JoBros were all set to go on tour when the news hit. And after weeks of guessing and not knowing, we finally got an answer that we weren’t too happy to hear about. Joe and Nick were, however, spotted on the stage together recently. Maybe more reunions will be in the cards for 2014?

The news that left us seriously heartbroken. Everyone was shocked when it was announced that Glee star Cory Monteith lost his battle with addiction and passed away in July. It has been months since his passing but he will forever be in our hearts and are inspired by the brave, strong face GF Lea Michele continues to put on every day.

It’s no secret that Miley Cyrus has been the surprise of the year. With her hot new album, crazy appearance and called-off engagement, she has made our jaws drop countless times over the past few months. What’s the craziest Miley moment you’ve encountered so far?

Which 2013 celeb moment are you still saying “OMG” about? Share in the comments below.

+ Fash face off: The ultimate red carpet looks of 2013