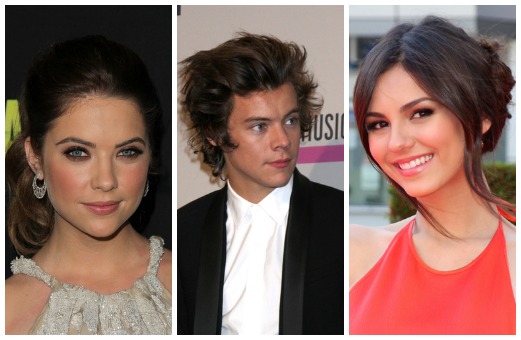 Cramming for tests just before break can be a bore. Give yourself a breather and check up on this week’s latest celeb gossip. Who has a new boyfriend and who got a haircut? Read on to get your weekly dose of celeb news.

Taylor finally gave us a good look at her new cropped locks this week. The pop star decided to chop her hair so now it hangs just above her shoulders. We love how she changed up her look. Perfect for the new year, right? What do you think of Swifty’s new look?

Last we checked, Victoria Justice was dating The Lying Game star Ryan Rottman. But apparently, the two have gone their separate ways. And it seems that Vic is doing just fine. Reports are now swirling that the former Nick star is now dating her Naomi and Ely’s No Kiss List co-star Pierson Forde. We thing the two are a cute match, what about you?

The Golden Globe nomination list was released this week and we were super excited to see our fave movie at the moment, Frozen, on that list for potential Best Animated Feature Film. Frozen is going against movies like Despicable Me 2 and The Croods, so the competition is extremely close. Find out who wins on Jan. 12 at 8 p.m. ET on NBC.

Kendall and Harry: It’s on?

When they told us they were “just friends,” we definitely had our doubts. And a new sighting of Harry Styles and Kendall Jenner this week is starting to prove us right. The two were spotted out together in NYC this past weekend while Harry was in town for 1D’s Saturday Night Live gig. The reality starlet is still keeping mum on the status of things, though, telling E! News this week there’s, “Nothing to say. No deets.” Is it time to name this couple yet? If so, we’ve got dibs on Handall.

Pretty Little Liar Ashley Benson took to Instagram this week to voice her opinion on the possible posters for the next season of her hit show. The pic is a super photoshopped poster of the Liars girls and Ashley captioned it with “Saw this floating around....hope it's not the poster. Our faces in this were from 4 years ago.....and we all look ridiculous. Way too much photo shop. We all have flaws. No one looks like this. It's not attractive” We love how Ash is all about girl power and loving yourself—all the flaws included.

+ Our fave holiday flicks, hands down!