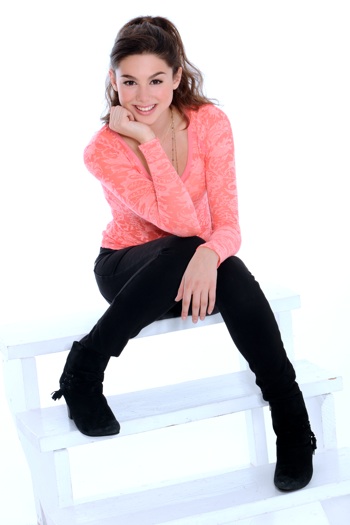 What’s it like to get slimed? Just ask Kira Kosarin. The star of Nick’s new superhero show The Thundermans (premiering tonight at 9 p.m. ET/PT) got drenched by the gooey stuff playing Phoebe, one-sixth of a household loaded with super powers. “It was freezing, but actually pretty moisturizing for my hair,” Kira spills about the slime. Here, the triple threat (she acts, sings and dances!) tells us about the more glamorous parts of her new gig—including her hot new co-star whom she’s actually known for a while.

GL: What do you love most about your character Phoebe?

Kira: She’s a math nerd kind of dorky, which I can relate to. She really cares about her school, and that’s totally cool to me since she’s also a superhero.

Judging by some of the pics we’ve seen, part of your wardrobe is pretty hilarious. Care to elaborate on any of them?

Well, recently Jack Griffo [who plays Max, Phoebe’s twin brother] and I both had to wear this cow costume. We were in our polka dotted pants and suspenders, walking around set. It was hilarious.

Speaking of Jack, what’s one thing fans might be surprised to learn about him?

Jack and I have actually known each other for a really long time before the show. We both moved to California to act at basically the same time. And he actually went to the first commercial audition that I ever went to [years ago]. His mom took us…we carpooled.

That’s adorable! Well if you and Jack were sibs in real life, what’s something you’d tease him about?

It’s so funny. Since we’ve been working on this show together, we’ve totally become brother and sister. We pick on each other all the time about our laughs because we both have really loud distinct ones. Like, if you hear them in a room, you know it’s us and we can impersonate each other’s spot-on at this point.

Clearly, super powers play a big theme in this show. If you could have any super power right now, which would you want?

You know what, I wish that I had the ability to function on only like two hours of sleep. There’s just not enough time in the day to dance, act, sing, see all of my friends…do all the things that I love to do. So if I could just cut down that nine or 10 hours a night of sleeping, it would be awesome.

Who’s one fictional superhero you think is awesome?

Superman. He can do everything!

What about one fictional super villain you secretly love?

Ursula from The Little Mermaid. There’s something so creepy about her that I just love.

Be sure to catch Kira in The Thundermans starting tonight at 9 p.m. ET/PT on Nickelodeon.

Sneak a peek at the new show below…

Are you excited for The Thundermans? What’s one super power you wish you had? Share in the comments below.

+ Get your Hollywood gossip fill and never be outta the loop