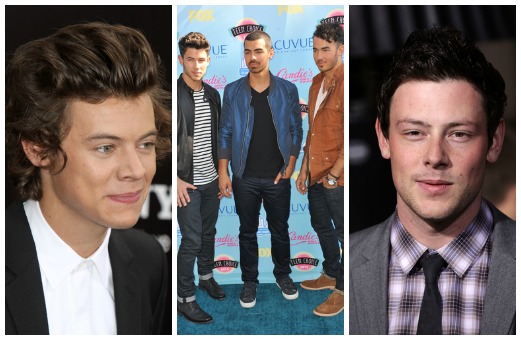 Between boy band breakups, sad goodbyes and new friendships, this week’s gossip has our emotions running wild. Which guy group is breaking up? Whose friendship is brewing while on tour? And what exactly is Harry Styles’ biggest hair secret? We’ve got it all below.

OK, we already knew that. But we found out this week that Harry’s dreamy mop is actually au natural. Lou Teasdale, One Direction’s hair stylist, gets paid to run her fingers through those gorgeous locks and she even admitted that these boys are far from high-maintenance, saying, “Harry wakes up like that! Sometimes I don't even see him before a shoot.” Um, where can we sign up for that gig?

In other 1D news, the boys revealed the art and track list for their new album Midnight Memories, set to hit shelves Nov. 25, today—songs that include “Little Black Dress” and “You & I.” Yea, we have a hunch these new tunes are gonna be great.

It’s sure looking that way. The three announced this week that their 19-date tour was being cancelled—just two days before it was supposed to begin. Rumor has it there has been a “deep rift within the band” and Kevin, Joe and Nick couldn’t agree on their music direction due to creative differences. Do you think the trio will make up…or is it gonna be splitsville for these talented bros?

The high school musical drama Glee said goodbye to one of its most beloved characters, Finn, on the show this and the actor who played him, Cory Monteith. Soon after the decision was made by the show’s producers to write Finn out of the series, and decisively, he too would die. The viewers of Thursday’s emotional, yet reflective episode found Finn’s death wasn’t dramatized enough. Tears flowed and tempers flared, but the episode was more of meditation on what death means to those left behind than death itself. Did you check it out?

Was Justin’s new song “Heartbreaker” (which he released this week) written about Selena? Whelp, she beliebes it is. But don’t expect her to be all up in arms about the new tune that is clearly about a broken heart. Sel opened up this week to a New York radio station, saying the new tune was, “Beautiful music. Especially since he is super talented, able to use it and interpret feelings through music. It’s what you do to grow as an artist, that’s what I did and what many people do. It’s sweet.” We’re glad to see these two can still be supportive of one another when it comes to their careers.

Taylor Swift and tourmate Ed Sheeran are BFFs. There’s no question about that. But did you know the country cutie, infamous for writing hit songs about her exes, actually takes dating advice from the adorable British ginger? Tay opened up in a recent mag interview, saying, “Ed said something that really resonated with me. He says there are different kinds of love: There’s physical attraction, mental attraction, and emotional attraction; there’s also comfort and obsession. You need to have all of those things in one person.” While rumors have been swirling that the two are the new “It” couple, we know they’re just close buds. Which celeb would you take dating advice from right now?