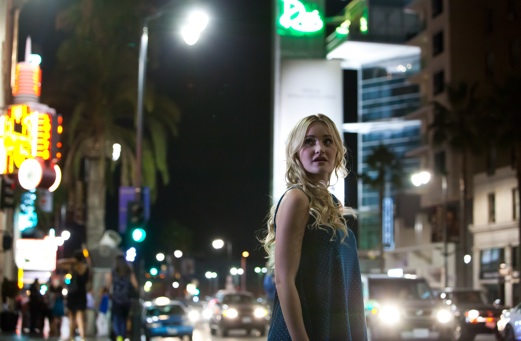 AJ Michalka is hitting the big screen Oct. 4 in Grace Unplugged. Will you be checking it out? The starlet (most notably known from singing group 78violet with older sister Aly) is playing the lead role of 18-year-old singer/songwriter Grace Rose Trey, who’s trying to make a name for herself in the music scene.

Grace is a small-town girl with big dreams, raised singing in her church choir with her former rockstar father, Johnny. You see, Johnny hit a Billboard No. 1 single 20 years ago but, when his success slowed, he lost his way before finding his faith and starting a new life far from Hollywood. When Grace comes into contact with her dad's old manager, though, and gets offered an opportunity to head to LA for a shot at fame, she packs her bags and chases her dream—without telling her fam.

Will Grace make her fantasy a reality, or will she be able to see past the flashing lights of Hollywood and rediscover who she truly is? We chatted up AJ for the scoop on her new, music-filled flick. Read on to see what she had to say.

What’s your favorite thing about your character Grace?
AJ: I love her ambition. She has this drive to perform and ability to enter a territory that she’s never grown up around to kind of start her own path.

Are you guys similar at all?
I think we’re similar in the sense that we’re close to our families. I think she goes through a little more of an angsty teenage life than I went through. She ends up separating from her family a little bit and feels like she really needs to spread her wings, which is something I didn’t really experience.

Is there a fun family tradition within your own fam?

Every year, my family would vacation to a dude ranch in the desert for either Thanksgiving or Christmas. We’d pack up, go on horseback and trail behind each other in the wilderness for hours. At the end, we’d set up camp and have one huge cookout and just roast marshmallows while telling stories around the fire. It was always quite the exciting experience!

There’s definitely some heartbreak in this film. What’s one thing you do to get over a breakup?
It’s hard when you’re recovering, but it’s important to not just sit there and be sad, but to get out there, be in the sun and hang with your friends. You just have to own up to what it is and accept it. I’m lucky because I have Aly and I think we’ve really helped each other during breakups.

Grace is a daring girl. What’s one of the biggest dares you’ve taken recently?

Performing at the Roxy in June, which was our first showcase in five years! My sister [Aly] and I started a new band [78violet] and it was a way to introduce our new sound. It was a big dare for me because I wasn’t sure how people would perceive it, and we’re kind of doing it on our own right now, but it was so cool.

Can you tell us a little bit more about your upcoming album?
The record will be out later this year, but we did just release our first single, “Hot House.” I just feel like it’s a very inspiring record. For Aly and I, we’re very much about the lyrics and what they mean to us and to other people. The best thing is hearing from a fan something like, “When I listened to this song, it made me feel like I was worth something in life or made me make a better decision.” That’s what I know we’re doing the right thing.

Be sure to catch AJ in Grace Unplugged—in theaters, Oct. 4.

Sneak a peek at the flick below…

Are you pumped for AJ’s new film? What about 78violet’s new album? Share in the comments below.