Dove Cameron gives us a peek at Liv and Maddie 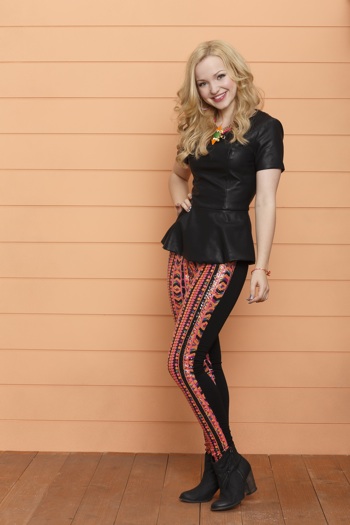 Disney Channel’s new show Liv and Maddie premieres Sunday, Sept. 15, at 8 p.m. ET/PT. Will you be tuning in? We’ve already got a glimpse at this hilarious new sitcom when it aired after Teen Beach Movie this summer (get the scoop here), and we’ve been counting down the days ’til the full series ever since.
We got the chance to chat with the lovely Dove Cameron, who plays both Liv and Maddie, identical twin sisters reunited after spending four years apart, on the show. Check out what she had to say about this exciting new role...um, roles.

GL: Tell us a little bit about Liv and Maddie.

Dove: Liv has been an international pop star for the past four years and she’s been shooting her hit TV show “Sing It Loud” in Hollywood. While that’s going on, her twin sister Maddie has been cultivating a name for herself as her town’s local basketball star back in Wisconsin. They used to do everything together, but have been separated for four years. And now that Liv is back home, they have to find that sister dynamic again.

Do you think you’re more of a Liv or a Maddie in real life?

I feel like they are exactly me—split down the middle. I think every girl has a little bit of both Liv and Maddie in them—they’re polar opposites!

What’s it like playing two characters on one show, then?

It’s a new challenge every day. Playing two people is definitely difficult, but it’s made possible by everyone around me and it’s a big team effort. We only usually get just two or three days to shoot an entire episode so it can be insanely difficult at time, but it’s what I like. I wouldn’t want to be anywhere else.

What’s one of the funniest things that has happened on set so far?

There’s never a day that goes by that something funny doesn’t happen. Not only is there a lot of pranking that goes on, but we also improv a lot of the scenes. The blooper reel is going to be insane!

So who would you say is the one who pulls pranks the most?

The problem with is that we’re all the mischievous one. I’m not kidding!

For more info on Dove and her new show, Liv and Maddie, be sure to check out GL’s October/November 2013 issue—on stands Sept. 17.

Will you be checking out Liv and Maddie on the Disney Channel this fall? Share in the comments below.

+ Are you dateable? Take the quiz to find out!

OH SNAP! Get the latest from GL on Instagram.