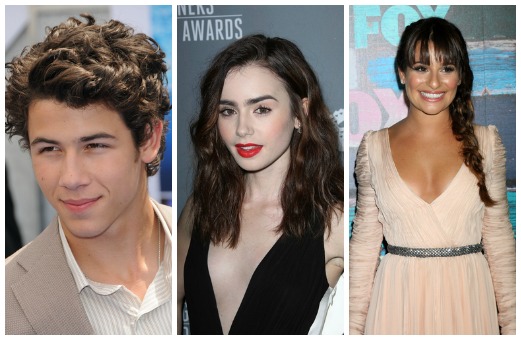 From breakups to makeups, this week has been full of surprises in Hollywood. It looks like one of our fave couples is definitely back together (guess who!), and another power duo has split. Wanna know more? GL is here to fill you in on the hottest celeb gossip this week.

We know you couldn’t possibly forget Sophia Grace, the adorable 10-year-old who’s appeared on the Ellen Degeneres Show for her amazing singing and rapping. Well, this girlie got some awesome news this week: she scored the role of Little Red Riding Hood in the new movie Into the Woods. Anna Kendrick, Johnny Depp and Emily Blunt are just some of the other big names set to star in the flick. We can’t wait to see it!

Lea puts on a brave face

Lea Michele returned to the set of Glee this week for the first time since the death of her costar/boyfriend, Cory Monteith. The starlet was spotted at the show’s recording studio sporting a special necklace that spelled “Cory.” Rumor has it Lea and the rest of the Glee cast will also be making an appearance at the 2013 Teen Choice Awards this Sunday (be sure to check it out on Fox). Our hearts go out to Lea as she continues to push through this rough time.

Another Jonas off the market?

Not so fast. But it does appear that Nick Jonas might be starting something with Miss Universe, Olivia Culpo. The two were spotted getting a little cozy at dinner in NYC this week. We have to admit, we’re a little bit jealous of this beauty queen.

Lily and Jamie are dunzo

The Mortal Instruments: City of Bones stars Lily Collins and Jamie Campbell Bower have apparently called it quits. While we don’t know exactly what caused the split, one source is claiming the pair still remains friends. And we’re guessing that’s a good thing considering the stars are in the midst of a press tour for their new movie (ya know, the one that sparked their on-set romance last summer) that hits theaters Aug. 21. Who do you think Lily should date next?

But Miley and Liam are back on!

Woohoo! Miley and Liam made their first red carpet appearance together in over a year on Thursday night at the premiere of his new movie, Paranoia. We sure hope this couple is back together for good this time.

+ Juicy gossip on the hottest celebs

+ Books a jillion times better than your summer reading assignment