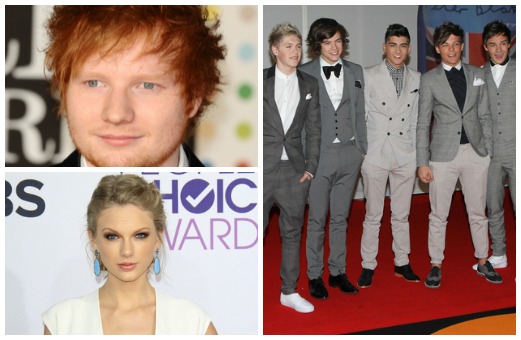 It's finally June and the gossip is still hot in Hollywood. There's been a lot of music-related news this week and celeb couple news (as always). What’s going on with some of our fave stars? Read on to find out.

Katy Perry and John Mayer back together?

So apparently John still has a thing for the pop princess. Katy and John previously dated for a while and were recently spotted flirting with each other at KP’s Memorial Day brunch. This week, sources say, “they are just hanging out...they’re not putting a label on it.” But next week, who knows?

About time! Miley’s off-again, on-again guy Liam Hemsworth has finally gone off and gotten himself a Twitter account this week. So what was his first tweet? “Kicking it off on Twitter for the first time. Thank you for following...-L.” OK, so he’s only following 13 people at the moment (including Miley, so we guess things are going well with them) but we’re excited to see this Hunger Games hottie’s following grow. Are you gonna follow @LiamHemsworth? Maybe if we recite his tweets in an Aussie accent it’ll be as if he’s in the room.

TSwift + Ed Sheeran = Their New Music Vid is Out!

Sorry, but we kinda, sorta think Taylor Swift and Ed Sheeran would make the cutest of cute couples. Taylor just released a music video for her new single "Everything Has Changed," featuring British singer Ed Sheeran and it’s adorable. It features a mini Taylor and Ed and shows their too-cute friendship grow into a little crush. Don’t worry we won't spill more, just watch it for yourself below…

This just in: Miley doesn’t care what you think

Miley Cyrus is a lot of things. She's def come along way since those innocent Hannah Montana days. And in a YouTube video for MTV News this week, she was quoted as saying, "People think of me as a party animal...but I'm also the hardest working person you'll ever know." (Well, she does have a new single that’s #2 on iTunes right now). And continues with, “The biggest thing people say to me is that, ‘I love that you don't care what people think,' because I don't, but in the best way possible." You stay sassy, girl.

Order your Teen Beach Movie soundtrack while you can

We can't wait for Teen Beach Movie to premiere this summer on Disney Channel. And right now we can't wait to get the soundtrack into our hands! It was just announced this week that pre-orders for what promises to be a super catchy album, started this week. Place your order HERE.

OK, we don’t necessarily know that for a fact. But a girl can dream, right? Either way, these dudes are about to rock the fragrance world. The boy band announced on Twitter this week that they are releasing their very first perfume—and naming it Our Moment. Smells like some seriously stiff competition for another singer’s scent (Biebs, we’re looking at you). According to Harry, the perfume smells like, “A summer’s day.” Set to hit shelves this fall, we’re excited to at least sniff it out. Will you do the same?

Which celeb moment made you go “OMG” this week? Share in the comments below.
Love this post? You'll heart these too...

+ No-fail tips to K.I.T with your crush over break

WIN BIG! Score an Amazon Kindle with $350 worth of beach reads!

MAJOR PLUS! GL is now on Google+ and Instagram. Fab!