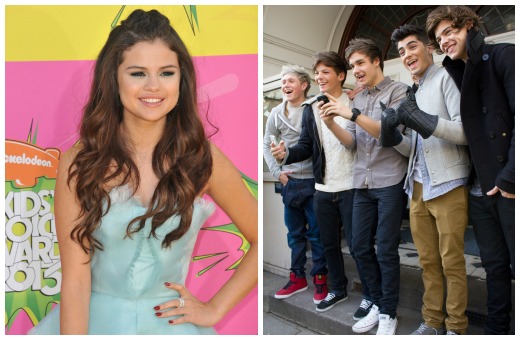 This week was huge for some of our fave singin’ celebs, from Selena Gomez to her ex, the Biebs. Read on for the latest pieces of news from La La “and to get caught up for your next goss sesh with the gals. It’s the perfect way for any girl on the go to stay up-to-date on the hottest celeb news.

Come And Get It

What’s your current fave song? If it isn’t Selena’s new hit, then it’s probably just because you haven’t heard it yet. Lucky you, we’ve got it right here! Sel dropped her latest song this week and we are obsessed with the Bollywood-like beat. This mature new sound is something we could def get used to.

Check it out below…

Slip of the tongue

The 1D boys were singing crowd favorite “Little Things” at a recent concert when things went a little, well, awry. As Harry crooned his line, “I’m in love with you,” one of the other boys couldn’t helping finishing his sentence for him. Watch here to see what we mean. Which mischievous band mate do you think cut in on Harry’s line?

Ay, carumba! We are having a tough time getting used to JB’s haircut this time around. We loved when he cut his long flowy hair into a more cropped and messy style, but we’re not the biggest fans of this new Rihanna-esque ‘do. Check out pics here and sound off in the comments. Are you a fan or no?

Get excited, Twilight fans. KStew's birthday was on Tuesday and R-Patz gifted her a pen that's worth over $46,000. Cha-ching! For a pen collector like Kristen, we bet she's thrilled to have a limited edition Tibaldi Bentley (ya know, like the car) Crewe fountain pen. So fancy. He got it engraved and everything. In case the whole pen-sitch didn't clue you in, rumors are that the on-again, off-again couple are back together.

After a complicated rumored cheating scandal, the darling celeb couple Miley Cyrus and Liam Hemsworth have decided to postpone their wedding. Why, you may ask? To focus more time on their relationship! We’ve gotta give these two some props for being responsible and rational about such a serious commitment. Bravo, two. We’re hoping everything works out in the end.

Which celeb moment do you think is most OMG-worthy this week? Blog about it, babes.
Love this post? You’ll heart these too…
+ OMG, she did what?! Catch up on the latest Hollywood gossip
+ 6 books you should give a second chance
WIN BIG! Land a $430 eco-friendly prize pack from 31bits.com
MAJOR PLUS! GL is now on Google+