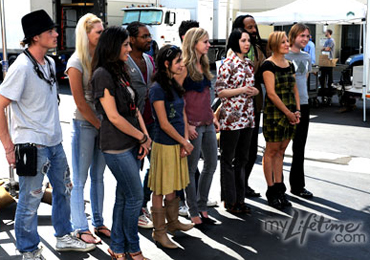 I was so happy I watched PR last night. So far, the season has been a little ho-hum but last night, the crew pulled out all the stops to make some seriously inspired creations. But let’s start at the top…

On the runway Heidi announced in a mysterious way, "It's about time to get you out of the sewing room." It’s obvious they’re gonna do something uber-Hollywood, and they’re soon whisked to a real soundstage.

They cast is greeted by PR hero Tim Gunn and L’Oreal’s leading man, Collier Strong, and we hear what’s gonna go down this week.

The Challenge: Pick a movie genre and then create a costume for a character in your flick. The budget is $150, and they have until (eek!) midnight to complete their masterpiece.

For the moment they start picking genres, it’s obvious no one wants to do western. Two of my faves, Shirin and Epperson, draw the so-called unlucky lot. Note: Am I the only one who likes denim and cowboy boots? Yee haw, people!

It’s time to sketch and…flirt? Yep, the first romance of the season flickered last night, when Carol Hannah and Logan exchanged cute glances across the table.

Thirty minutes later, they head to Mood and the pace is fast and furious. Nicolas confesses he’s bummed with his performance. “I have been in the bottom three times. I want to be experimental; I want to be daring.” Hmm…foreshadow much?

When the designers get back to the workroom, they start to create their characters. Frankly, it worries me. Epperson’s got a western chick whose husband’s away at war. Nicolas’ idea is out of this world, literally. “There are three queens who watch over the universe and they all reside on Orion’s belt,” he spilled.

With six and a half hours left, Tim steps in to guide our heroes and heroines.

Things are goin’ fine and dandy…until he gets to Ra’mon. He takes a glance at Ra’mon’s green spandex ensemble and frets instantly, in that very Tim Gunn way.

"This could be sublime or it could be a big hot mess,” he laments. Classic!

The models arrive and Ra’mon starts to get seriously upset. “This is looking very Kermit the Frog gone wrong!” He decides to start over (with only two hours left!), and the rest of the designers carry on with their finishing touches.

The clock strikes midnight and everyone heads home. In the a.m., the designers chat it up in their apts, do their hair and makeup (which is always a li’l crazy…) and then it’s off to the workroom.

They snip, zip and steam their costumes and Tim reminds everyone to “work like there’s no tomorrow, ‘cause for one of you there won’t be!” Ouch.

Minutes later (in TV time), the models traipse down the runway. When the last catwalker goes backstage, the top and bottom three become crystal clear. 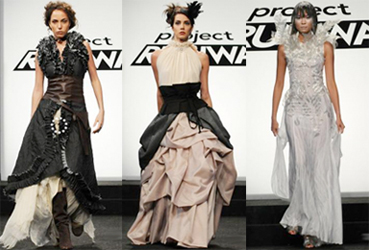 The Good:
Nicolas, Epperson and Christopher wowed the judges with their sci-fi ice queen, western warrior girl and period piece vampire bride, respectively. I was smitten with the gorgeous gowns concocted by Epperson and Christopher—seriously fierce and the fabric looked amazing. The judges preferred Nicolas’ white-hot dress and he was crowned the winner. What a happy ending for a guy who’s been on the bottom more than once. 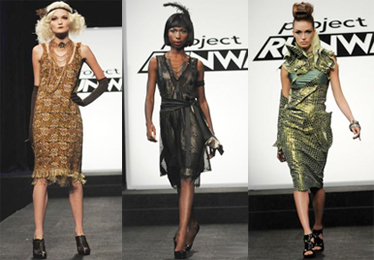 The Bad:
Louise’s final frock was black, boring and paper bag-esque. The judges deemed it a snooze-fest and her fate was on the line. Gordana created a gold flapper dress that was “unspecial” and was more Halloween than Hollywood. Can we send ‘em both home?

The Auf’d:
Poor Ra’mon’s costume went from a bad bodysuit to a green leathery disaster. Heidi had three words for this guy: Hot. Leather. Mess. Sadly, he was given Ms. Klum’s famous German send-off, and told to pack his things. We’ll miss you, R!


Next week, a romance heats up and Michael Kors is back. Tune in to find out who will rule the runway!
By: Katie Abbondanza