The Dutch teens who witnessed history: A unique view on the Baltimore riots 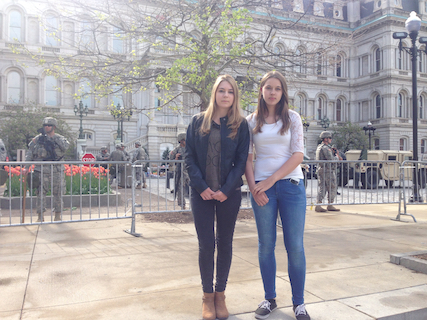 It was always our dream to work for a magazine, so when we found out we could do an American internship through our high school in the Netherlands, we began to search for a magazine that would be willing to take us in. After finding Girls' Life through Google, we got in touch and we were able to arrange a week to come to America for the first time. We were so excited for the experience and couldn't wait to see what the publishing world was like and what Baltimore, Maryland had to offer.

At first, our parents were very hesitant to let their 16 and 17 year-old daughters go to the U.S. alone. It took a long time for them to get on board and finally OK it. Once they agreed, we hit up airbnb.com to find a host family who would be willing to let us stay for a week. We were really lucky to find a super couple who were very kind.

We left Europe on Friday evening and arrived in Baltimore on Saturday April 25 after an 8 hour flight. When we landed, we took a taxi from the airport to where we would be staying for the week. Our first impression of Baltimore was that it was a very nice (and a really big city). Coming from a town of only 2,000 people, we felt like Baltimore really had so much to see and do. The city seemed friendly, peaceful and and totally different than anything we had ever seen before––but that all changed pretty quickly.

As it turns out, we arrived on the very day the Freddie Gray protests would start. One of the first things we saw that day was a woman carrying a demonstration sign. Of course, at that moment, we had no clue what it was all about. Our host family explained that a man had been arrested by the police and later died from injuries he had sustained in the police wagon. While we were very shocked at first, everything seemed very controlled and both sides seemed respectful.

We took a city bus to the GL offices for our first day of our internship. Everyone was so nice and the office was nothing like anything we have seen in the Netherlands. There were so many clothes, beauty products and a ton of fun things in every corner. Our first day, we got to help put clothes together and create mood boards for a fashion shoot which was really, really cool. We were so excited and honored GL would even let us be a part of something like that! But at 2:00 p.m. (only a few hours into the internship), we were told that Karen, the CEO and Editor in Chief, would take us home immediately due to a new wave of protests that had just started.

That was when we first realized that what was happening was a lot more influential and dangerous than we thought. After Karen dropped us off, our host family told us that shops and restaurants had been closed and lot of people left their job early because of the violence that was starting. It was then we knew we were actually a part of something that would one day be considered a historical event.

At this point, our family began to worry and reach out to us, but we kept telling them we were fine (because we were—we felt completely safe). Our supervisor back home in the Netherlands actually talked to our parents about getting us back home, but we absolutely didn’t want to leave.

That night, our host family kept us inside and we saw what most people saw: the cars and buildings burning, the angry protesters throwing bricks at the police, the chaos the city fell into. But unlike most people, we knew it was going on right outside our door, less than a mile away. In our town, we don't even have guns or police, that's how peaceful it is. It was so sad to see a place that so many people love be destroyed.

On Tuesday, a lot of things were closed, including schools. The GL offices are right next to the police station and we soon learned they had put up barricades all around that area. The National Guard was even called in—by the afternoon, we saw big military trucks rolling down the street. We've never seen anything like this. But it wasn't long before we saw a new sight: citizens cleaning up the streets and people helping keep peace between the police and protesters.

On Wednesday, it was safe enough for us to go to the office again and we were really excited about getting back to work. It seemed like a normal day except we learned that the baseball team, the Baltimore Orioles, were playing a game...with no one at the stadium because of concerns about safety. That night, a curfew started. Restaurants that were bustling the week before were now shutting at 8:00 p.m. Most of downtown wasn't even open at all. We could only imagine how many people weren't working that needed that money. But Wednesday night was calm. Without any cars or people, the city was so quiet. Cities are usually so noisy but the only sound was the constant hum of helicopters and drones flying over us, keeping an eye for anyone starting trouble.

On Thursday, we were sad it was our last day. The authorities told people there was a potential for problems on Friday once a report on the case was revealed and that it would be hectic out on the streets. The offices would be closed, just to be safe. When it was time to say goodbye, we hugged everybody and they all wished us a nice journey. Our boss Jossie took us up the street to Baltimore City Hall where we were able to take the picture above and snapshot a little peice of the history that we got to witness.

You can't really see it in the picture, but City Hall is on a square and every inch was occupied by either the military, police, protestors or newspeople with their cameras and vans. It was like a whole village of media people. When we said we wanted to experience American journalism, we didn't even realize what we would see. There were famous reporters like Anderson Cooper right there!

We are def going to miss it all and even though we didn't get to spend the whole week at GL as planned, we are so grateful that we could have had such an experience. Even though Baltimore was dealing with a lot of problems, it did not affect us negatively. We never really felt unsafe because most people were friendly and caring towards us at all times. Honestly, witnessing this event as given us different outlook on life. We now know that even though things can seem so different in a far away place, people are the same and all want to live in a place that they feel safe and peaceful. We hope everyone in Baltimore has that soon.

We will share when we get back home this weekend––and hey, there aren't many Dutch teens who could say they got to be a part of American history, right?