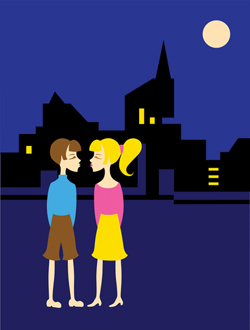 You dig him, but you think he must be all wrong because…why? He’s older? Your BFF’s ex? What? Here’s why it might not matter.

What happens when you have a crush on the “wrong” boy? Like, that dude from summer vacation who is skater-cute but already hooked up? Or the guy from chem class who’s goth and you’re…not? When making a perfect-guy checklist, girls have serious skills. Yet why do you think you work so hard to push your secret Mr. Wrong outta your mind?

But wrong by whose rules? Not love’s rules. You like who you like. Or, you want what you can’t have. There’s that, too. So GL sifted through the most common types of “all-wrong” guys. Because we wanna show you that the guy you think is not for you might actually be right-on.


YIKES! HE'S YOUNGER THAN YOU

One year, two years…what’s the big deal here? Oh, right. The big deal is that everyone would gossip about it. Question: Are you really one of those girls who stress that dating an underclassman lowers your cred?

We’re struggling to believe you’re this cramped on the opinions of people at school. Because we have to say it: Who cares?! Unless he’s ridiculously immature despite good looks, or he’s in the fifth grade and you’re his babysitter—don’t get creepy—this so-called obstacle is silly! A grade below you is keeping you from an amazing goodnight kiss or perfect dance date? It has to stop. You’re killing us with this.

OK, this could be worrisome, but maybe not. It depends on how old we’re talking. Girls report that they like to go out with older guys because guys mature at a slower pace—so older gents are often perceived as having the same maturity level as younger girls. You’re a sophomore, and he’s a senior? Hot. A junior and a senior? Hotter. A sophomore and a college sophomore? Not hot.

Stone-cold rule on this: If he’s more than two years older, or already 18, consider him too old.

Too-old can enter unsafe territory. And we all know at least one girl who has the creep-out relative you steer clear of because he likes to tell you how you’re growing up sooo fast. Yeah, eyes up here, dude. So you’re a freshman, and he’s in his senior year? He’s not just Mr. Wrong. He’s Johnny Heck-no. Forget he exists.

HE GOES TO A RIVAL SCHOOL

Hm, really? A school would keep you from dating someone you dig? What a head-scratcher. But a GL reader wrote us and explained how she is on the cheerleading squad and her secret crush is on the opposing school’s football team. So it would be an issue if their buddies were to find out. But that’s a bit overly dramatic, don’tcha think? If there is pressure from friends, consider the fact that who you date should really be none of their concern as long as you’re happy.

Truth is, it’s pretty glam to date someone from another school—how very jet-settish of you. Please, go for this guy. If you have more hurrah for your school than you do for each other, this romance is nothing to holler about anyway.

Your crush is your BFF’s ex-boyfriend? Awkward. But understandable. One reader wrote this: “Everyone knows that when your best friend gets a guy and he’s adorable, you always get a crush on him because you spend so much time with them.” And then they break up. You have two choices here: 1) You can stress out over what to say to her when she finds out from someone else that you’re crushing on her ex, or 2) you could just ask her if she really cares if you go there.

If she’s stuck on him, end of story. Friendship matters more. It doesn’t matter if they’ll never get back together or how they were only together two weeks. Unless he’s her ex from when they were 8, this is the rule good friends do not ever break. So there’s no need for us to elaborate. Your BFF dictates the outcome of your crush on her ex. The end.

He’s always at your house…to see your brother. He even came on the last family vacation. With your brother. He’d be premium BF material if it weren’t for the fact that your brother blows farts at you daily—and you hope to gawd this guy isn’t cut from the same mold.

On closer inspection, though, would dating your brother’s friend be so bad? With some brothers, this could be like worlds colliding—and the backlash might not be worth the effort. But for other brothers, it could be great. His buddy gets a girl, but for once that doesn’t mean his pal always disappears to be with her. So ante up, and tell your brother, tell his BFF, then see what happens. Warning: Don’t milk your brother for info, and don’t tell his bud that your bro still sleeps with his blankie.

HE'S NOT "IN" WITH YOUR USUAL CREW

Whether you call it a crew, a posse, a clique or just your friends, everyone has a group. The group generates an identity, and that’s where stereotypes are born: jocks, preps, grits—groups have different names at different schools. Music can define a group (punks, rockers), or fashion can make a group (goths, glamazons). And on it goes. What it all boils down to is your interests. If you don’t share common ground with a boy, you won’t have much to talk about. But exploring your differences could be the best part!

Not considering someone from outside your crew because you assume he’s limited to what his appearance or after-school activities suggest? Mistake. Who says the cute brainiac from AP classes isn’t into serious revival rock? And why wouldn’t gothboy love to shoot some hoops? If you have a crush, say hi, and find out who’s under dreads or earbuds. Could be he’s your Romeo in the “wrong” clothes.

HE'S SOOOO OUT OF YOUR LEAGUE

Says who? He’s the guy who likes you because you’re yourself. He thinks you’re beautiful, listens to your theories on life and sends you texts that just say “smooch.” He’s your guy! But you don’t believe it, and it’s not going to turn into anything. Why not? Because he’s too cute. No way would that guy like you. He’s fly, and you’re…what? Not fly?

Chica, did you not see Dirty Dancing? That’s the ultimate girl-next-door-gets-ridiculously-hot-guy flick. Deciding a guy is too good for you is in the same bad form as deciding a guy isn’t good enough for you. It’s pure speculation, judgment and just all so negative. So why not give it a shot? You can’t finish what you don’t start, so snap out of it. Stop selling yourself short, and just go for it. He’s already giving you major signals. Who knows? You might be the girl of his dreams.