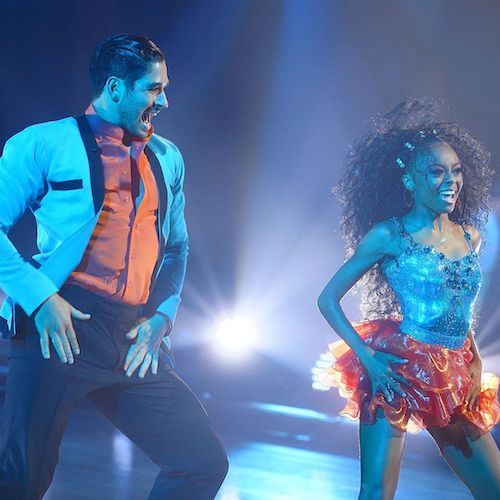 Season 29 of Dancing with the Stars has kicked off to a fab start with a diverse and well-known cast of celebrities including one of GL's faves, Skai Jackson. Being the shows youngest dancer this season, Skai has attracted lots of love from her fans constantly voting to keep team #ReachForTheSkai in the competition. Skai and her partner, pro dancer Alan Bersten, have been slaying the dance floor with their poppin' costumes and fierce moves—we love to see it. The complex Tango and Samba routines have left both the judges and their fans in awe.

Skai and Alan have gained a huge fan following and have been keeping them up to date on when & how to vote for them, where they stand in the competition and all the details about their exhausting dance rehearsals. It's been very motivating for the fans to see how far Skai has come since the first day, showing that the countless time spent in rehearsals has paid off, and practice makes perfect.

Amazing day at rehearsals today!!! Proud of you @skaijackson can’t wait for you guys to see it!! 💃🏻🕺🏼#teamreachfortheskai

In their most recent samba performance, Skai slipped on one of their advanced lifts, causing her to grab onto Alan's hair for support. Although the dancing duo got thrown off by embarrassment in front of the judges and all their fans, the mistake didn't stop Skai from getting right back up and finishing the rest of the routine strong. Skai set a great example for everyone watching: When you make a mistake or feel embarrassed, you keep going.

😂 I didn’t realize I pulled his hair! Sorry @alanbersten We’ll make up for that slip next week! #TeamReachForTheSkai

After the performance was done, Skai posted all about it on her Instagram and Twitter, showing her fans that she has an excellent mature attitude about the situation. Fans have adored how Skai was able to join in on the fun by making her onstage slip-up into funny GIFs and memes.

Corona snatching my summer plans from me 🙃 pic.twitter.com/fSlKQV1eNe

Although team #ReachForTheSkai did not get the high score they were hoping for in their Tango routine, they were asked to stay another week because of the perseverance they showed on stage. The judges were very impressed with Skai and Alan's excellent teamwork and sportsmanship.

We love you so much Skai and cannot wait to see you and Alan dance again this week. You are such a motivation and inspiration to us all at home. Keep up the great work! Be sure to watch tonight on ABC to see Skai and Alan's hopeful comeback.

POSTED IN TRENDING, Celebs, Skai Jackson, Dancing with the Stars