Girls vs. Guys: Who gets more jealous? 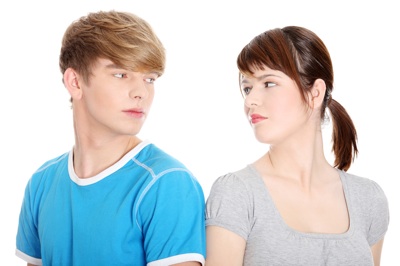 Do girls get way more jealous than guys? I have this one guy friend and we both like each other, but aren't dating because we are waiting for him to be on the same campus. Whenever he talks about other girls and hangs around them, I get super jealous and he knows it. Then I talk about other guys and hang around with them he doesn't seem to get jealous at all. What's the deal?
His Answer: “Guys can get just as jealous as girls,” says Tim, 14, “if they are into a girl they can get very protective.”
Decoded: Although it may seem like guys are chiller about their GFs, they can get just as jealous as girls do about their guys. If they feel like another boy is a threat to their relationship there is no saying how protective they can get about you.
Your Move: Just because he isn't getting jealous doesn’t meant that he doesn’t care about you. If he isn’t freaking out about you hanging out with other guys then take that as a good sign, that means that he trusts you and feels comfortable with your choice of who you hang out with.

+ 8 signs your BGF is crushing on you

+ Dear Carol, aka your ultimate wingwoman, answers all your guy Qs

A JOURNEY TO CHOOSE HER OWN DESTINY

Enter a world on the brink of war where one more roll from a powerful die may set Calliope, a witch with a dangeous secret, on the road to demise. Enter to win here!