My crush likes me--but he already has a GF. What should I do? 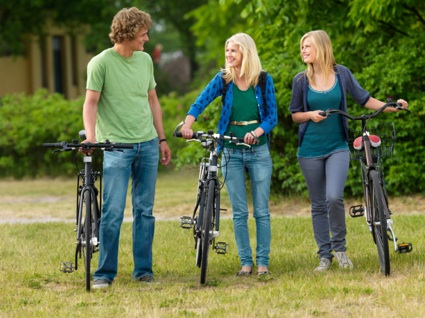 I like this guy and everyone else says he likes me too. Only one problem… he has a girlfriend! What’s with the mixed signals?
His Answer: “I would not act on these signals if you are receiving them from a guy who already has a girlfriend, because that can lead you down a road you would rather stay away from. If this guy truly does like you then things will work themselves out, but that will require time. Just be patient and don’t go rushing into something you are going to regret," advises Langston, 15. Josh, 13, agrees, saying, “It’d be a jerky thing to hit on a girl’s boyfriend.”
Decoded: Fact is, teenage guys can be terrible at giving clear signals. It’s not their attempt to play hard to get or be mysterious—dudes have little idea what they’re doing, or how their actions are perceived. So that long eye contact or cute smile? Might not be what you think it is. And most importantly, all guys agree: it’s not right to pursue a guy in a relationship. Not only does that put in him a sticky situation, but you wouldn’t like it if some other chica were making a move on your boyfriend.
Your Move: Right now, the most important thing is to be patient. Ignore the gossip and whatever “signals” he might be sending your way. Until the guy is single, he is unavailable to you, and backing off is the right thing to do. If he really likes you, he’ll break up with his girlfriend, and let you know that he’s into you. Hate to say it, but for now at least, it’s time to move on.

+ How to get a BF this year

+ Dude drama got ya down? Bill and Dave to the rescue!