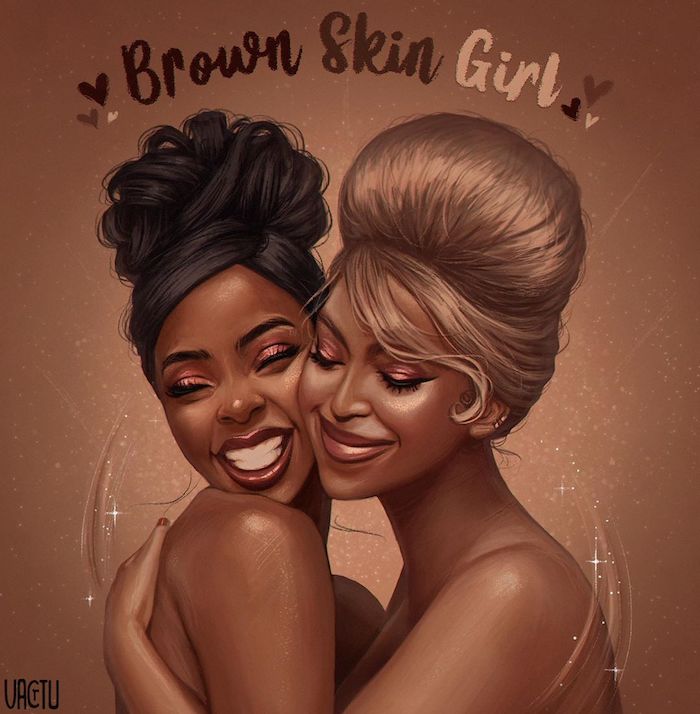 For Nkiru, as the only female director on the project besides Beyoncé herself, it was deeply important to portray a feminine energy. "Brown Skin Girl" at its pinnacle basked in the glory of black beauty and sisterhood through a celebratory lens.

Nkiru was intentional about the imagery created in the video—from young black girls enjoying their youth running around the tree of life, to a black woman being held gently by a black man to the debutante ball scenes (which represent a rite of passage in African-American culture oftentimes neglected by mainstream media). In a recent interview with Vogue, Nkiru explains the intentional imagery of plants and flowers displayed throughout the video was because they "were thinking about ideas around growth and nurturing." This included a frame of a ballroom scene shot from above in order for the dresses to appear like petals, Lupita Nyong'o admiring her beauty through a mirror framed with flowers and a young black girl holding flowers in front of a majestic painting of blooming plant life.

The portrayal of black women *by* black women was a refreshing reminder that we are not overlooked. The song opens with lyrics stating, ”Brown skin girls, skin just like pearls, the best thing in the world, I’ll love you more than anybody else,” SAINt JHN and Blue Ivy sing.

The lyrics are a reminder our beauty is bountiful and exquisite. Black women have constantly been ridiculed and discredited by the media; therefore, the existence of this song is a reviving force perpetuating the confidence among black women to continue appreciating and loving themselves wholeheartedly in all our shine and glory. Perhaps one of the most endearing and sweetest moments from the short film was the symbol of sisterhood between Beyoncé and her lifelong friend Kelly Rowland. In a frame, Beyoncé gazes in admiration at Kelly, who has suffered from racism in the music industry, and they share an authentic laugh.

Beyoncé singing to Kelly,  "I'll never trade you for anybody else," followed by an embrace of a 30-year friendship sent goosebumps throughout my body.

Black love cannot be measured, and black sisterhood is timeless.  "Brown Skin Girl" is a reminder to every brown girl our blackness is, and will forever be, our love story.