The best vids to go viral this year 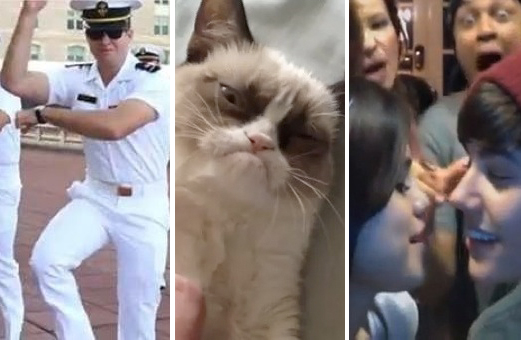 Each year, thousands of videos are posted to the Internet, but only a special few become popular enough to be viral. Viral videos can be funny, or sweet, or entertaining. But they all have one thing in common: we can’t get enough of them! Read on to see our all-time fave viral vids from 2012.

This mock music video caused the pop anthem to skyrocket in popularity. It was posted by BTR’s Carlos Pena, and includes appearances from the likes of Justin Bieber, Ashley Tisdale and Selena Gomez. Not to mention the dance moves are hilarious!

While “Gangnam Style” itself was a viral video, we can’t stop watching the Naval Academy’s remake of the vid. Hey, we love a cutie in uniform…plus, ya can’t help but giggle at how ridiculous they get while dancing.

Cat videos will forever be in our hearts. What better way to waste time on the internet?! Grumpy Cat is the perfect example of this. All she has to do is make her everyday face of disappointment, and we can’t stop aww-ing.

On a slightly more serious note, this video shot up to viral status at the courageousness of a small-town news correspondent. When a viewer emailed her to tell her that he thought she should lose weight and be “a better role model,” she took a stand and taught an important life lesson about bullying.

Team GB “Sexy and I Know It”

Of course, we’ve gotta include something from the summer Olympics! We were head over heels for Team GB’s male divers, especially 18-year-old cutie Tom Daley. Check out their hilarious remake of the LMFAO hit, “Sexy and I Know It.”

Since the release of the video, there’s been a whirlwind of controversy surrounding the topic and the founders of the project. Regardless of whether you approve of the charity or not, there is no doubt that this short documentary opened many people’s eyes to the truth and tragedy of third-world living conditions.

Which 2012 viral vid is your fave? Did we leave anything off our list? Blog about it, babes.

PERFECT FOR FANS OF PERCY JACKSON

In order to save the mortal realm, Zachary Ying must journey into a world where Chinese history and myth collide. Follow Zack on his mission to seal the portal to the underworld—and save his mom before she disappears forever. Enter to win here!