What would you do if you married a Jonas? 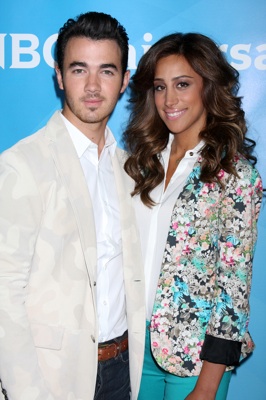 Well, we’re all about to find out! Kevin Jonas and his wife Danielle are heading to the small screen tonight in their new E! reality show Married to Jonas.

Set to chronicle the ups and downs of newlywed bliss, the show will also feature the good ol’ JoBros as they work on their big comeback—a much different angle than the one we’ve seen during their Disney days.

In a sneak peek of the pilot episode, Danielle is nervous about having to cook for Kevin’s family. Yes, the Jonas clan. And is struggling to fit in as the first Jonas female (well, aside from their mom, of course). On the flipside, Kevin is trying to get accustomed to Danielle’s outgoing and opinionated bunch. Will they be able to survive their in-laws? Just goes to show what a couple will sacrifice when they find true love!

Be sure to check out Married to Jonas to snag a different look at life with the JoBros when the show premieres tonight at 10 p.m. ET/PT on E!

If you could marry a Jonas, which would you pick? Blog about it, babes.

Which is Olivia Rodrigo's best song?