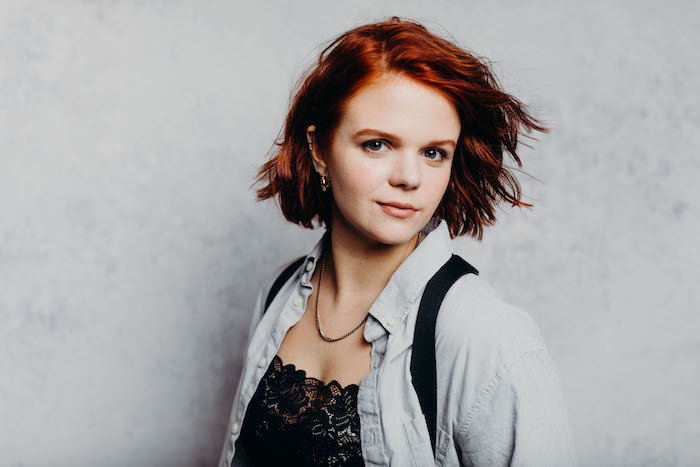 Mackenzie Lansing is *seriously* an actress to watch. We caught up with the HBO Mare of Easttown performer on playing her complex character Brianna, how she started acting and so much more...

Mackenzie: I grew up in France in a small town outside of Paris, but also lived in Kinshasa [the capital of the Democratic Republic of the Congo]. For most of my life, I was considered a shy kid. I think everywhere, but especially in France, they encourage you to do theater to get you out of your shell. So I started taking a class at a local community theater. There was a Parisian director who wanted an actual 13-year-old to play [a similar-aged character] and came and watched one of our rehearsals and asked if I wanted to be in the play. Then I got into acting school and moved to New York and never stopped.

Mackenzie: Getting to understand what makes people tick. I'm only two steps away from being a different person—if I just tweaked my circumstances slightly or just approached a situation a little bit differently. Then it's like you're this whole other character. It makes me feel closer to people.

Girls' Life: How was your experience working with Kate Winslet on Mare of Easttown?

Mackenzie: It was amazing. They say not to meet your heroes, but she did not disappoint. She's such a kind person, and for someone who plays so many serious, intense roles, she is so lighthearted and funny. She takes her job very seriously, where she understands that she sets the tone, and just treats everyone like [they're] the most important person in the room.

Girls' Life: How do you relate to your Mare of Easttown character Brianna?

Mackenzie: If I'm being completely honest, [Brianna] isn't so far away from who I was as a teenager. I have a lot of compassion for her. If you grow up with certain circumstances, certain surroundings, it's really easy to become a person who's a bit rough around the edges. When I saw [Brianna] in the script, I was like, "Oh, this is me if I didn't find acting."

Girls' Life: What did you learn from being part of Mare of Easttown?

Mackenzie: It was a master class in film and acting—it's Kate Winslet, Evan Peters, [our] amazing director Craig Zobel. The script [shows] how all the characters in the show are haunted by some kind of trauma, if you look at it closely. They're all fighting between that darker side and that lighter side of themselves. There are no bad guys, no good guys. It taught me how that's true in real life, too.

Mackenzie: It's going to be OK. Listen to your gut. Just because someone's older than you doesn't mean they know better. You should listen to other people's opinions and take them into consideration—but at the end of the day, follow your own path.

Girls' Life: What are your goals for the future?

Mackenzie: I definitely gravitate toward characters with stronger, edgier personalities. I play a lot of teenagers and there's a lot to dive into there. In the future, I would love to write and produce my own show, creating a character that's sort of specific to me and where I come from. I want to do it all!

Image Credit: Jessica Osber Photography, NY. Parts of this interview were edited and condensed for clarity.

Learn about marine biology and surfing in this graphic novel. Enter to win here!

Can a reality TV princess turn the boy next door into her prince? Enter here!