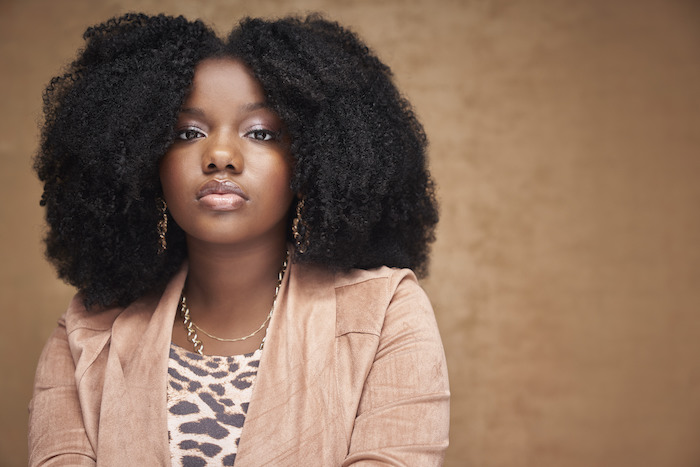 Bria Danielle Singleton is no stranger to the spotlight. After booking her first pilot at four years old, Bria has been in the acting biz her entire life. Whether she is booking commercials, working in television or starring in short films, Bria has quite an impressive resume at just 15 years old.

Now you can catch her in Netflix’s Thunder Force, a superhero comedy film starring Octavia Spencer and Melissa McCarthy. The film, which drops on April 9, follows the story of two estranged best friends who are forced to save their city from supervillains when one of them invents a formula that gives them superpowers. Keep reading to learn all about Bria's favorite moments on set, biggest inspirations and dreams for the future.

GL: When did you start acting?

Bria: I started acting when I was around  eight months old, but my passion for [it] really took off when I was around five. When you’re acting as a [young] child, you don’t really know what is going on. When I started getting more into acting on my own, that is when I found my love for it and decided I wanted to pursue it. Now, it’s something I plan to do for the rest of my life.

GL: How did you feel when you first learned you got the role of tween Emily in Thunder Force?

Bria: I was with my mom and my sister when I got the news. My sister was literally screaming because she was so happy for me. I was in total disbelief. When I found out, I realized that this was my first step into growing my career. I was just so excited to continue doing what I love to do.

GL: Tell us about Thunder Force? What was it like working with such a talented crew?

Bria: Thunder Force is a superhero movie, of course, but it is funnier and more laid back than other superhero movies. It is a family film and it definitely provides a lot of laughs.

My last day of filming was the day Mrs. Spencer started filming, so unfortunately I didn’t get the chance to meet her. I got to spend some time with Mrs. McCarthy, though. Her husband is the writer and director, so the whole family was on set. They’re all so kind and they did their best to motivate everyone on set. The whole experience was better than I ever could have imagined.

Bria: I play the tween version of Emily, Mrs. Spencer's character, in the movie. Emily and I are similar in how we maintain friendships. She is a very good friend. She is always there for her friends and they know they can count on her, which is something I pride myself in. I always have my friends backs and I’ll be there when they call. Emily and I are different, too. She keeps to herself, she is quiet and she doesn’t really interact with many people...which is the *complete* opposite of myself. I am definitely more outgoing than Emily.

Latest obsession? Collecting vinyls! I just got a record player.

GL: What was your favorite moment from filming?

Bria: My favorite moment was when I first met Mrs. McCarthy. It was one of my first days on set, so I had been meeting the crew all day. When they asked if I wanted to meet Melissa, I was thinking it was just A Melissa...I didn’t realize it was THE Melissa. So when I entered the hair and makeup trailer, I was expecting to meet a crewmember, and then it turned out to be Mrs. McCarthy. I hadn’t had time to prepare, so I just stood there in shock while she greeted me. It was so crazy and unexpected!

Bria: Mrs. Spencer was already an inspiration of mine, but someone a bit closer to my age is Marsai Martin. She is only 16 and she is the youngest producer in Hollywood ever. She has done so many things already—she’s a writer, producer, an executive producer and an actress. Having a role model like her is so inspiring. It makes me want to work toward being like that!

GL: How has your family supporting your career ambitions?

Bria: My mom and sister are my biggest supporters and my #1 fans. My mom drives me from audition to audition. We live an hour from Los Angeles so we spend a lot of time together. She is always waiting for me and helping me. I really appreciate her.

My twin sister also does acting, so she is always there to run lines with me to record me for self-taped auditions. My sister always has my back and I always have hers. I truly don’t know what I’d do if I didn’t have my sister. She is just such a big part of my acting career, so I love having her by my side through it all.

If you could have any superpower, what would it be? Let us know by tagging us on social media @girlslifemag.

Portions of this interview have been edited for clarity and grammar.