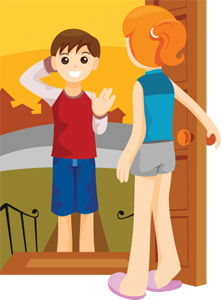 I’ve always had a really hard time with friends. I had tons before I moved four years ago, but when I moved to where I am now, nobody wanted anything to do with me. The last few days and a week before Christmas break, I started hanging out with this guy. He and I are becoming really good friends.

I would honestly call him my best friend, but not just because he’s like my only true friend. He’s somebody I feel I can share things with. The problem is, he’s a senior and I’m a freshmen. Is it okay to hang out with a guy 4 years older than me?

Transitions are hard, I moved a half a mile away from my old house and felt like I may as well been living in China. It certainly doesn’t help coming into a school where everyone already seems to have a set group of friends. I am sure it's not that nobody wants to hang out with you, it's just that they don’t know you and they don’t feel like they are the ones that need to reach out since they have the friends and you don’t. Try to work on meeting people in your class, say hi to the girl next to you. These things, although they seem stupid and insignificant, are the starting point for conversation.


As far as this boy goes, I don’t think it’s necessarily unhealthy to have a friend that is older than you, or a guy friend that’s older than you for that matter. However, be sure that his intentions are true and also understand that since he is a senior and you are a freshman, he is going to be leaving for college in a few months. I would keep him as a friend but work on meeting people closer to your age that you can form true bonds with.

POSTED IN bff, Friends, how can I make new friends