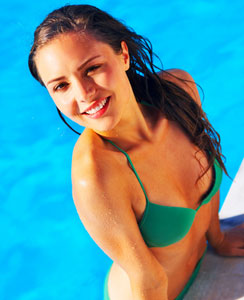 I was at a friend’s house for her co-ed birthday party. We were swimming in her indoor pool when our guy friends joined us. Then my friend flashed them! Of course, I didn’t. Are guys really interested in girls who show them stuff, or do they prefer more modest people? I just couldn’t believe that happened.

DAVE: Who’s your buddy—Janet Jackson? Your friend certainly had a lapse in judgment, which she probably now regrets. While her X-rated actions no doubt garnered some short-term attention, it was a split-second decision that could potentially haunt her for years. Don’t be fooled by thinking such over-the-top (or is it under-the-top?) stunts are a good idea. You never know when a moment will be a defining one and become a part of your lifelong reputation. When it comes to your rep, you don’t often get second chances or do-overs—it’s the cumulative total of everything you do. So when in doubt, err on the conservative side. I’d bet Janet would serve up the same advice.


BILL: When you shop, do you notice that inexpensive, ordinary stuff is displayed in easy-to-access bins? But the special stuff, like jewelry or electronics, is always a little harder to get to. Try to buy a $50 video game and, with all the locks and security involved, you’ll feel like you just tried to get into the National Security Administration. The point is this: Stuff with a lot of value is usually a little more difficult to obtain. By flashing her wares, your BFF risks putting herself in the bargain bin, which isn’t where she should want to be. Sure, guys might show a little initial interest. But, in the long run, guys want to have a relationship with a girl who’s more discerning.