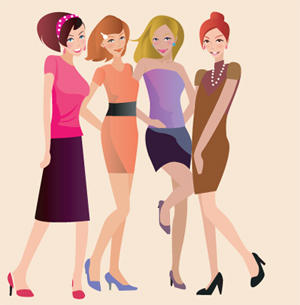 Tired of being Invisible Girl? If you’re blending into the scenery, learn to stand out in the crowd!


Break the Rules
All your BFFs wear purple to the pool on Fridays or meet for smoothies on Tuesdays? Occasionally wear green on purple day or say, “Hey, who wants to meet at Taco Bell on Tuesday?” It proves you’re an individual, not a carbon copy.


Your BFF takes charge of all the plans? Instead of staying mum, make some noise. She wants to see Shrek the Third, when you’d rather go to Pirates 3? Say so! Scratch that—you’re sick of going to the theater. Every. Single. Saturday. You want to knock down some tenpins for a change of pace…so tell her.


Just as you don’t have to go with the flow during chill time, same goes for organized activities. Why join dive team just because a BFF does? It’s not your thing, and your lame jackknives will pale in comparison to her perfect-10 swans. Instead, do whatever you excel in.


It’s totally OK to hang with girls outside your crew. Branching out into different social circles brings out other aspects of your personality. It demonstrates, even if only to yourself, that your identity is not dependent on a certain group of people. You can mix it up, right?


A bud constantly “borrows” clothes she doesn’t return, or hits you up for a slice at the snack bar but never treats you to so much as a stick of gum? She may be using you. Do not be relegated to doormat status. Next time your so-called friend asks for a favor, put your foot down and say, “What have you done for me lately?” Don’t expect an answer, but that should make a statement!