Liar, liar: Recover from getting caught in a fib 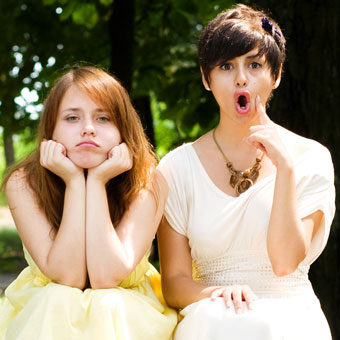 Getting caught in a lie is one of the worst feelings. Why? Because chances are it's a lie you probably didn't need to tell in the first place. Now the trust between you and your best girl in the world is shattered. The bad news is there's no instant friendship fix. Regaining your girl’s trust might be a long process, and it’s probably not going to be fun. Lucky for you, we've got four steps to get you two tighter than ever!
How bad is it?
Assess how serious the situation is. If you only lied about something trivial, like a party you went to without her or a dress you only told her looked fab, then you might be in luck. Unless your chica is super sensitive, you two still have a good chance of making up. Your friendship won’t end over one little fib! But if it’s some major misbehavior, like stealing her boyfriend, or humiliating her, then it might be hard to ever be the same. But don’t despair! As long as you recognize your error and are willing to rescue your relationship, you can still make it work.

Fact is, nothing will be fixed if ya don’t talk it out. No matter how awkward it is, you need to sit down and have a face-to-face convo about what happened. If she doesn’t want to see you, try an email or a text. A big no-no? Getting others involved. It’s between you two, so don’t crowd the crisis with people who aren’t already caught up in your drama.
Apologize
The first words out of your mouth should be “I’m Sorry.” If you lied to her, you’ve betrayed your friendship, and she’s hurt. Don’t try and play the blame game or offer excuses. Just tell her you feel terrible and that you still want to be besties. If your pleas for forgiveness don’t result in hugs the first time, keep trying—your determination will show you care.
Be patient
It stinks, but trust only comes back with time. When she forgives you, show her you’re still the same girl, and that you have her back. Although this might be a given, never lie to her again – you probably won’t get a second chance. Eventually things will go back to normal, so take a deep breath and be the best friend you can be. Good luck, girlie!
Talk back! Would you forgive a lying friend? Where do you draw the line?

POSTED IN Friends, bad friend, 411 on fighting with friends, my friend keeps lying, can I trust my friend

ZapZyt helps you say goodbye to breakouts in as little as five hours. $5