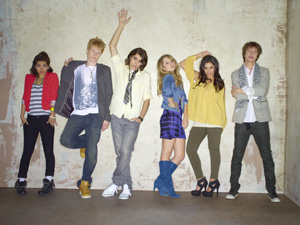 Summer’s getting closer! And, ahhh, we can taste that fresh squeezed lemonade already. OK, or maybe it’s because we just caught Disney Channel’s Lemonade Mouth before its April 15 debut.

The flick centers around a band of outsiders who put their skills to the test, forming one rock-solid friendship bound not only by talent but a love for the school’s organic lemonade machine.

So do the stars of Lemonade Mouth actually enjoy the sweet stuff in real life? We headed to the film’s Albuquerque, N.M. set (where we actually didn’t sip on any ourselves) to not only find out, but also see what they love pairing it with.

Forget milk and cookies when you’ve got lemonade.
“If I had a [lemonade] stand, I would pair it with chocolate chip cookies.”—Bridgit Mendler

Lemony goodness should be a BBQ staple…
“I like lemonade. I’ve probably drank over 1,000 cups doing this. A good meal that goes with it is hot dogs.”—Adam Hicks

“I love lemonade. But the lemonade in England [where I’m from] is fake. It’s not lemony, more sugar. The best meal [to have it with] is a barbecue.”—Naomi Scott

“I love strawberry lemonade. It goes great with burgers or anything on a skewer.”—Nick Roux

…Or a nice compliment to a hearty meal
“A good steak and mashed potatoes goes well with a strong lemonade.”—Blake Michael

Why chicken out on lemonade?
“Let me tell you, the only meal to pair lemonade with is Chick-fil-A. Their classic lemonades are the best.”—Chris Brochu

OK, OK, not EVERYONE actually enjoys the yellow stuff. Our girl Hayley Kiyoko can’t stand it! “I don’t like sour stuff, but I had to drink so much of it. We used Country Time, which was pure sugar and I had to water it down,” she told us. Hilarious!

Be sure to tune into Lemonade Mouth when it airs on the Disney Channel April 15 at 8 p.m. ET/PT.

Heart lemonade? What’s your favorite thing to pair it with? Blog about it, babes.

Pick your favorite board game: