WE TRIED IT: Sansa slotRadio 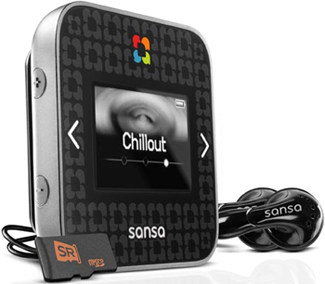 If you know anything about me, it's that I love tonsa diff types of music (and change songs halfway through!)—even more so when I'm working out. That's why I was super excited to try Sansa's new slotRadio. This teensy-tiny music player (it's about 1.5 inches) is jam-packed with over 1,000 preloaded Billboard songs.

Best part about it? There's all different genres—country, contemporary, R&B/hip hop, alternative and rock. Plus, there are workout and chillout channels to chose from. Can't find what you're looking for? There's a switch to listen to the good ol' FM radio, too. You've got something to groove to no matter what mood you're in.

slotRadio was soo easy to use at the gym. The device easily clipped to my clothes and stayed put while I was working up a sweat on the elliptical. The sound quality was awesome, but the headphones were still small and super comfy. The volume buttons on the side were a li'l small but still pretty easy to use.

I liked how you could easily press the large arrows on either side of the main screen to go from genre to genre. It was so cool how the slotRadio told you not only the artist and title of the song that was playing right then, but the next one coming up, too. Going from genre to genre but decided you wanna go back to your original song choice? No worries, slotRadio saved your exact place in the song of whatever station you were listening to.

The variety within each genre itself is def one of the best things about the slotRadio. It was so much fun to put on the rock station and hear old-school bands like Electric Light Orchestra and Tom Petty and the Heartbreakers, but have newer groups like Incubus and 3 Doors Down on there too. I loved jammin' to R&B/hip hop faves (Beastie Boys and Usher, something for everyone!). Contemporary was a mix of chiller peeps like John Mayer to more upbeat stuff like Kanye. The Bravery's "Believe" pumped me up on the alternative section, and hello, We Three Kings' "Check Yes Juliet" is just the cutest song ever (perf to daze out and daydream about your crush instead of staring at the clock). The workout channel was the most random but somehow cool mix of gym-jams ever. Such a fun mash up of dance music and rock.

Two of the stations, country and chillout, weren't really workout worthy, but would be cool to relax to on a roadtrip with the fam. I had a great time working out with the slotRadio. Such a great time, that I'm, um, kind of still listening to it right now.

Happy National Book Lover's Day! What are you reading rn?

GRAND PRIZE! One lucky girl and her bestie will win the TAO Clean Orbita Facial Brush (worth $300). The brush rotates to thoroughly clean out pores. The base keeps the brush head protected and dries it while charging—so it's always ready when you need it.