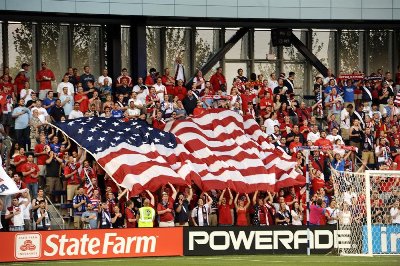 It’s game time! Yep, the Women’s World Cup has officially kicked off and we’re beyond psyched. Team USA’s first game is Tuesday, June 28th against The Democratic Peoples’ Republic of Korea (Korea DPR). Tune your TVs to ESPN at 11:30 a.m. EST, throw on your O’Reilly jersey and start cheering.


According to USA Today, the U.S. team has a pretty good shot at winning. Our major competition is Brazil, Sweden, and Norway. This year, the gals are a mix of more experienced players and younger ones full of excitement, passion, and energy. This combination will definitely play to our advantage.  With players like Christie Rampone (the oldest at age 36) and Alex Morgan (the youngest player on the roster at age 22) we can and should expect a lot from all of these women. Hopefully they can bring home the title!

What do you soccer players and soccer fans think? Are you as excited as we are about the Women’s World Cup 2011? Who are your favorite players and role models?


» Wanna get fit fast? Sign up for GL’s free newsletter and we’ll send you tons of eat-right tips, motivators and workouts straight to your inbox every Friday!

WIN IT! Enter now to score a trip for two to NYC + tix to a Broadway show!