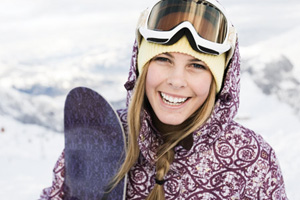 We chatted up pro snowboarder Torah Bright for the Feb/March issue of GL (coming your way soon). But she had so many cool things to say, we couldn’t keep it all to ourselves. Here are some more tips from this awe-inspiring athlete.

She’s over dreading the gym.
“I used to hate going to the gym,” Torah swears. “Now I’ve found a little fun in it. Find the fun in everything you're doing and it turns it into a game.” But that doesn’t mean she’ll be trading her snow boots for full-time sneakers anytime soon. “The fitness stuff isn't as fun as being on the mountain.”

She’s dishing advice for first-time snowboarders.
“I would say go get a lesson,” she tells us. “It's frustrating to learn off of friends. I recommend getting a lesson and most of the time you've got the swing of it after a couple of days.”

She’s way chill before a competition.
We asked Torah what she does before a big event like, say, the Winter X Games, which she’s competing in later this month. “I tend to take it pretty easy. I've tried psyching myself up and it works in the opposite way,” she confesses. “Just being calm and relaxing and enjoying the time and go about my day normal as any other day.” (Ed note: How much do I wish I could channel that laid-back energy?)

She’s all about cross-training.
Torah’s indoor routine is as daunting as a major mountain. “Usually, I hit the gym around 8:30 or 9:00. I’m there for about an hour and a half. I alternate between upper body and lower body and aerobics.” But this sporty chica doesn’t stop there. She also counts tennis, surfing and skateboarding among some of the other activities she hearts. “I've taken to a little [skateboarding] recently,” she says. “I’m keeping it mellow, because skateboarding is not forgiving.”

We hear ya, girl. Stay safe out there and good luck at the X Games!