My Tryout Tips to Help You Make the Team 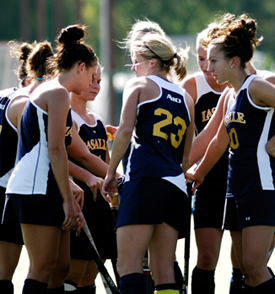 Fall sports are my fave. I love how they start when the weather is still boiling and end with the leaves crunching under your cleats. The first game of the season is always thisclose the first day of school, so there’s an oh-so-fresh buzz in the air.
When I was in high school, autumn was also the time for my most beloved game: field hockey. From away games to spaghetti dinners, the season was always a blast (and, yeah, more than a bit tough).

By the time I graduated HS, I’d been on 11 varsity teams and was the captain of 3 my senior year—it was totally awesome and paved the way for me to stay fit later on. Having survived about a billion tryouts, I figured I’d pass on some wisdom.

Give it your all, no matter what
Whether you’re doing warm-up laps or running tricky drills, your coach is always watching. That means you have to give your b-e-s-t effort, even if the task at hand is really complicated (like something you’ve never tried before) or feels so ho-hum. Your coach wants to see that you’re willing to learn AND that you’re gonna be a team player, through the wins and the losses.

Never, ever whine
See also: Eye-rolling, heavy sighing or complaining. Tryouts are going to be hard. No one (well, most people) don’t like sprints. Your coach gets that, but it’s her job to test you and get you in amazing shape for the season. Put on your game face, get out there and have a positive attitude. Even if it’s raining or 7 a.m. or 104 degrees, you have to show you’re gonna be an asset to the team in all sitches.

You only get one opp to make an impression, so take advantage of it. Whether that means going to captain’s practices or staying a little late to master a skill or charging to the finish line, don’t hold back. Now’s the only chance you have to land a spot on the squad and you’ll feel better knowing you went full-out. Go for it, girl!
Blog it out...What sports will you be playing this fall? What’s your best tip for making the team?