6 dating words of wisdom from the Web

Oh, Internet memes, you understand us. And while we’re LOL-ing, “liking” and retweeting our fave viral vids and pics, we forget there are actually lessons to be learned. That’s right, even when it comes to guys. We rounded up the biggest fails and cutest lolcats to show you how to avoid dating disasters—and unwanted Internet stardom. 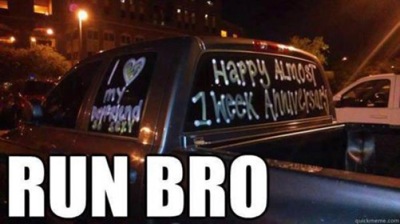 Oh, honey, no. Stoked you have a BF? We get that. But celebrating an almost one-week anniversary by–gasp–drawing on his stuff? Neither of those things can lead to keeping your cutie. First, see if he’s actually interested in celebrating your anniversary—odds are he’ll want to wait at least a few months, depending on the guy. And second, puh-lease don’t scream it from the rooftops. But nothing sends guys running like this next girlie…
Stalker status

Eep! This is three solid minutes of what not to do in a relationship. Now, we know that you aren’t making copies of his keys or monitoring his every move (we hope not, anyway—cringe). But even casually snooping through his texts or non-stop nagging are big no-nos. Give your guy some space and let him miss you if you don’t see him for a day or two. Otherwise, he won’t want to see you again.
Putting on the PDA 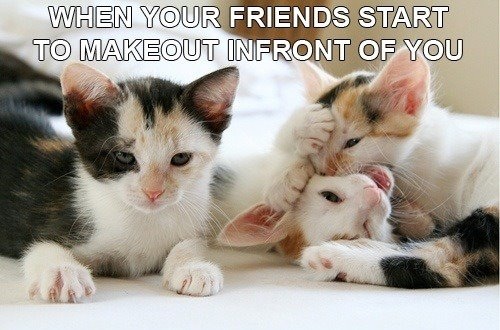 “OMG I love watching my bestie make out with her BF!” said no one ever. Seriously. Don’t do this. Holding hands? Cute. Pecking? Sure. But eye roll-worthy, vomit-inducing PDA? How about “no.” Your friends are happy for you two, but they’re not thrilled to see you show it 24/7. 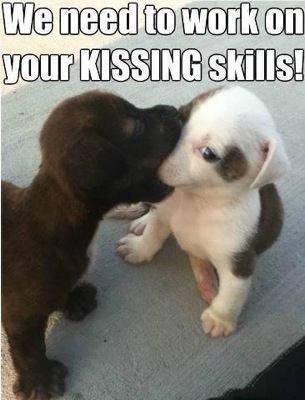 Locking lips can be nerve-wrecking if it’s your first or even second time. And while nobody expects you to be perfect from the get-go, there’s no excuse for you to nom or slobber over his face. For more kissing confidence tips, head here.

Ouch, right? The Cruel Breakup Scale goes from “honorable” to “harsh” in this order: in person, by phone, through a note, in a text and by Facebook status. Making it public without a heads-up is downright evil. Do the right thing and tell him face-to-face. And when you do have to inevitably change your relationship status, can the quarreling and keep the sideshow off your friends’ News Feeds.
Attack of the clones

Identical wardrobes: adorable for the elderly, not so much for the teen set. The only time it’s OK to wear the same outfit with your guy is as a couple’s Halloween costume. Or, unless you coincidentally both wore the same color tee and jeans on the same day (hey, it happens). Get a couple decades of commitment under your belt before this level of wardrobe coordination.